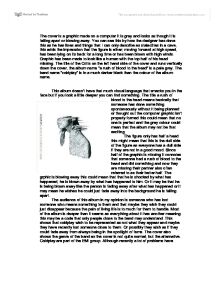 Connotation &amp; Denotation of &quot;Coldplay- A Rush Of Blood To The Head&quot;

The cover is a graphic made on a computer it is gray and looks as though it is falling apart or blowing away. You can see this by how the designer has done this as he has lines and things that I can only describe as stalactites in a cave, this adds the impression that the figure is ether; moving forward at high speed, has been lying on its back for a long time or has been blown with high winds. Graphic has been made to look like a human with the top half of his head missing. The title of the Cd is on the left hand side of the cover and runs vertically down the cover, the album name "a rush of blood to the head" is a pale grey. ...read more.

isn't properly formed this could mean that no one is perfect and the grey colour could mean that the album may not be that exciting. The figure only has half a head this might mean that this is the dull side of the figure as everyone has a dull side if they are not in a good mood. Since half of the graphic is missing it connotes that someone had a rush of blood to the head and did something and now they are missing their partner also often referred to as their better half. The grphic is blowing away this could mean that that he is shocked by what has happened, he is blown away by what has happened to him. ...read more.

Most of the album is deeper than it seems as everything about it has another meaning this may be a code that only people close to the band may understand. This shows that coldplay wish to be represented as not what they appear and maybe they have recently lost someone close to them. Or possibly they wish as if they could fade away from always being in the spotlight of fame. The cover also shows the genre of the band as the cover is not quite normal, but the alternative. Coldplay are part of the EMI group. Although recently a lot of problems have happened with the company. The EMI group also has other original artists to its name such as the gorillaz. ...read more.