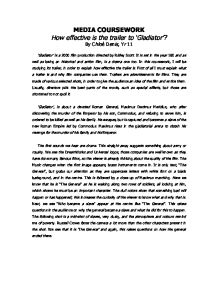 How effective is the trailer to Gladiator(TM)?

MEDIA COURSEWORK How effective is the trailer to 'Gladiator'? By Chlo� Denis, Yr 11 'Gladiator' is a 2000 film production directed by Ridley Scott. It is set in the year 180 and as well as being an historical and action film, is a drama one too. In this coursework, I will be studying its trailer, in order to explain how effective the trailer is. First of all I must explain what a trailer is and why film companies use them. Trailers are advertisements for films. They are made of various selected shots, in order to give the audience an idea of the film and entice them. Usually, directors pick the best parts of the movie, such as special effects, but those are shortened to not spoil it. 'Gladiator', is about a devoted Roman General, Maximus Decimus Meridius, who after discovering the murder of the Emperor by his son, Commodus, and refusing to serve him, is ordered to be killed as well as his family. He escapes, but is captured and becomes a slave of the new Roman Empire led by Commodus. Maximus rises in the gladiatorial arena to obtain his revenge for the murder of his family and his Emperor. ...read more.

The Text continues by showing, "The Gladiator", and a close up of Maximus appears. He looks worried and angry and is half in light half in shadow, which I think shows his anger at someone or something. This is followed by "Who defied an Empire", and a mid-shot of Caesar and another person, waving at the crowd, they are in shadow which enables us think that they must not be the 'nice characters'. The most important part at this point, is the music change. All the way through it was the same music but now, more brass instruments come in and the pace builds up as well as the volume of the music. We need to remember that the trailer keeps going, increasing its pace, so the viewer has less and less time to think what is happening, all he knows is that a general became a slave, a slave became a gladiator, a gladiator defied an Empire. This is very effective because as the viewer sees all this information in such a short time, his will to know why it happened and what has happened increases. His curiosity builds up as the pace builds up. ...read more.

Camera shots focus mainly on the character's expressions or pose, so for example, the viewer asks himself why a certain character looks angry and who at. Camera angles in this trailer show mainly the importance of the characters, such as the shot of Maximus from a very low angle. This affects the viewer because although the general has become a slave, he is still as powerful, and that will confuse the viewer on why that is. The Sound effects show that the film contains a lot of action and suspense, and the lighting shows a lot the atmosphere of parts of the film, such as death, poverty or malicious plans or thoughts. The Music and pace building are very effective, because they mix up all the viewer's questions and thoughts as the text goes on. In all, this trailer is very effective to 'Gladiator'. By giving limited information of the film, the trailer raises many questions in the viewer's mind, which leads to increasing their will to see the movie. It shows that the film is not only action but also historical, and the suspense grows throughout the media text. All the effects and shots are put in a way that will attract the viewer to see more of the film. So the trailer is indeed very effective to the film. ...read more.