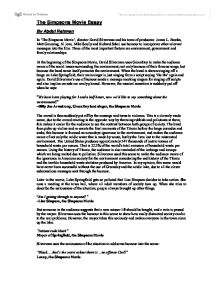 In The Simpsons Movie, director David Silverman and his team of producers: James L. Brooks, Matt Groening, Al Jean, Mike Scully and Richard Sakai use humour to incorporate other relevant messages into the film.

The Simpsons Movie Essay By Abdul Rehman In 'The Simpsons Movie', director David Silverman and his team of producers: James L. Brooks, Matt Groening, Al Jean, Mike Scully and Richard Sakai use humour to incorporate other relevant messages into the film. Three of the most important factors are environment, government and family relationships. At the beginning of the Simpsons Movie, David Silverman uses GreenDay to make the audience aware of the social issues surrounding the environment; not only because of their famous songs, but because the band name itself promotes the environment. When the band is shown singing off a barge on Lake Springfield, their main singer is just singing from a script saying 'Da Da' again and again. David Silverman's use of humour sends a message mocking singers for singing off scripts and also implies crowds are easily pleased. However, the musical sensation is suddenly put off when he says: "We have been playing for 3 and a half hours, now we'd like to say something about the environment!" ~Billy Joe Armstrong, GreenDay lead singer, the Simpsons Movie The crowd is then suddenly put off by the message and turns to violence. This is a cleverly made scene, due to the crowd reacting in the opposite way by throwing rubbish and pollutants at them; this makes it easier for the audience to see the contrast between both groups of society. ...read more.

tracks them down. "The government actually found someone!" ~NSA employee, the Simpsons Movie This statement mocks the US government for their inadequacy of being unable to find people they are looking for. Silverman cunningly uses this humour to imply that the government is spying on everyone's conversation. This is makes the audience more aware of the government 'tapping in' on conversations. I think this scene adds great humour to the movie, and is a vital part of the movie to show the evil governmental schemes. "It takes real courage and leadership to make choices without knowing them" ~Russ Kargel, the Simpsons Movie In this quote, Silverman uses Russ Kargel to show how persuasion is easily used politically by fusing it with pride. However, president Schwarzenegger picks number 3 again. But Russ Kargel makes the president pick Number 4 by manipulating his answer. Silverman uses humour here to show how easy the president's words can be manipulated. Soon after the plot to destroy Springfield is confirmed, the government hires Tom Hanks to create propaganda on TV so the people of the US support the government. "The US ran out of credibility, so they borrowed mine" ~Tom Hanks, the Simpsons Movie In this quote Tom Hanks admits that the government are just using him as propaganda. ...read more.

Near the end of the movie, Homer apologises to Bart for being a bad father. Bart doesn't want to accept his apology, but when Homer mentions that he could hold the bomb, Bart forgives him. Silverman uses this humour to show how father and son are both simpleminded and alike. "What a great mistake you turned out to be Maggie" ~Homer Simpson In this quote, Homer confesses that Maggie was a mistake. Silverman uses this humour to show how a lot of families in general are started of as mistakes. In my opinion, this humour was very informative for the audience, but subliminally made them to think about the consequences of sex. At the end of the movie, Homer and Marge kiss in the woods riding on a motorbike. After kissing Marge says that was the best kiss of her life. But after learning many thing in his 'quest' to save Springfield', Homer alters her words to say it was 'the best kiss of her life so far'. Silverman's uses this moment to sum up the movie and show how Homer progresses throughout the movie. This message tells the audience to cherish what they have, and look forward to the future. Using all these different techniques such as subliminal messaging and sarcasm, this is how Silverman of the Simpsons uses humour to incorporate other relevant messages into the film. But did he mean all the messages? Or were some just a coincidence? ...read more.