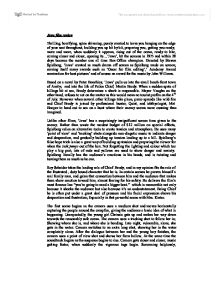 Jaws Film Review. Rather than waste the modest budget of $12 million on special effects, Spielberg relies on alternative tools to create tension and atmosphere. He uses many point of view and tracking shots alongside non-diegetic music

Jaws film review Thrilling, horrifying, spine shivering, purely created to leave you hanging on the edge of your seat throughout, building you up bit by bit, preparing you, getting you ready, more and more, when suddenly it appears, rising out of the ocean, ready to bite, coming closer and closer, opening its...'Jaws', hit the screens in 1975 and within 28 days became the number one all time Box-Office champion. Directed by Steven Spielberg, 'Jaws' created as much drama off screen as Spielberg made on screen; earning itself many awards such as 'Oscar for film editing',' Academy Award nomination for best pictures' and of course an award for the music by John Williams. Based on a novel by Peter Benchley, 'Jaws' pulls us into the small beach-front town of Amity; and into the life of Police Chief, Martin Brody. When a sudden spate of killings hit at sea, Brody determines a shark is responsible. Mayor Vaughn on the other hand, refuses to act on the matter as this would mean no tourist profits on the 4th of July. ...read more.

Kinter. The first scene begins as the camera uses a medium shot and moves horizontally capturing the people around the campfire, giving the audience a basic idea of what is happening. Unexpectedly, the young girl Chrissie gets up and makes her way down towards the reasonably safe ocean. The camera uses a tracking shot to follow her in; Showing where she is, and where she is heading. Late night, vulnerable, alone, she gets in the water. Camera switches to an extra long shot, showing her in the water completely alone. After the dialogue between her and the young boy finishes, the camera uses a point of view shot and shows her from bellow. At the same time the soundtrack begins as the suspense begins to rise. Camera gets closer and closer, music getting faster, when suddenly the vigorous tugs begin. Screaming helplessly, struggling to survive...the scene changes, showing the boy calmly relaxing on the beach. Switching back with the tension refilled, she holds on to the buoy giving us the 'satisfactory sigh', that maybe, just maybe she will survive; But this isn't the way the story ends, vicious tugs, screaming, panic and she is tugged under for good. ...read more.

This point diegetic and non-diegetic music are playing along side each other, which in my opinion is creating a very effective way of showing fear. It's not the films objective to deliver a message or show us how we should feel about something. This film has its goal of entertainment and it's Spielberg's main interest to entertain you, and clearly this is when he is at his best as the great filmmaker he is. Considering Jaws is now quarter of a century old it has aged incredibly well and it's as tense and as suspenseful today as it was back in 1975. Spielberg has done something rare, creating fear of not knowing what lurks in the water with us, changing the way we look at the water forever. Now how's that for powerful filmmaking? Hard to imagine there are still people out there who haven't seen 'Jaws'. It is suitable for all audiences, and essential viewing for anyone who loves movies. If you are still one of them, I highly recommend you get out there and get a copy, you will never look at the oceans in the same way again... that's a promises. ...read more.