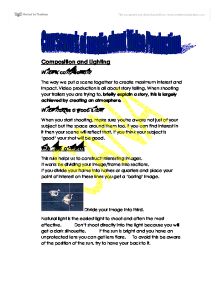 Composition and Lighting What is composition? The way we put a scene together to create maximum interest and impact. Video production is all about story telling. When shooting your trailers you are trying to, briefly explain a story, this is largely achieved by creating an atmosphere. What makes a good shot? When you start shooting, make sure you're aware not just of your subject but the space around them too. If you can find interest in it then your scene will reflect that. If you think your subject is 'good' your shot will be good. The rule of thirds This rule helps us to construct interesting images. It works by dividing your image/frame into sections. If you divide your frame into halves or quarters and place your point of interest on these lines you get a 'boring' image. Divide your image into third. Natural light is the easiest light to shoot and often the most effective. Don't shoot directly into the light because you will get a dark silhouette. If the sun is bright and you have an unprotected lens you can get lens flare. To avoid this be aware of the position of the sun, try to have your back to it. ...read more.

This trailer has some features that were found in the trailer quantum of solace like they both started with a black screen. They both show the ending date on the end of the trailer along with the name of the movie. Both of the narrator had a narrator speaking over the different potages from the different scenes. * The sound effects in this movie were very tensed and they really made the audience tense and curious. They colors in the trailer were a bit dark and showed the theme of the trailer. * There are quick fade in between the shots depending on the type of the shot e.g. if it was happy shoot the screen went white and the transition speed was a bit slow but if the scene was continuous then the fades were a bit fast. * Another thing that I noticed was that the trailer was a bit slower in the bingeing then in the middle. And then it was really slower at the end to make up the suspense. * There are attractive caption in between the scenes which make the audience to get more into the play. * The trailer was for about 2:19 mins long ?? ?? ?? ?? ...read more.