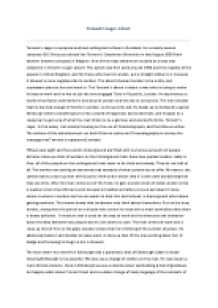 ﻿Tennent?s Lager Advert ________________ Tennent?s Lager is a popular and best-selling kind of beer in Scotland. Its currently owned company C&C Group purchased the Tennent?s Caledonian Breweries in late August 2009 from another brewery company in Belgium. One of the many adverts we studied as a class was Caledonia?s Tennent?s Lager advert. This advert was first aired around 1990 and the majority of the people in United Kingdom, and for those who lived in London, put a straight dislike to it, because it showed a more negative side to London. The advert showed London to be a dirty and unpleasant place to live and work in. The Tennent?s advert is about a man who is trying to make his way to work and he has to use the very engaged Tube in Piccadilly, London. ...read more.

The workers are setting an extremely bad example of what London has to offer. Moreover, the camera takes a close up shot of the public?s feet and it shows that it is very dark symbolising that they are dirty. After the man comes out of the Tube, he gets a wider vision of what London is like. A medium shot of an African tourist dressed in traditional clothes is stuck and doesn?t know where is where in London and no one wants to help him and instead, is shoving each other about getting nowhere. This shows clearly that Londoners only think about themselves. Out on the busy streets, a long shot of a person on a bicycle who covers his nose with a mask symbolises that there is heavy pollution. A medium shot is used on the way to work and he witnesses and alteration down the alley between two people and no one seems to care. ...read more.

The man walks into a classy bar and we can see that everybody is talking to each other and they are having a good time. Lastly a medium shot is made showing the man drinking a pint of Tennent?s Lager while talking to his friends he made in the bar. To conclude, there are many differences that are shown in this advert. It shows London to be stressful, crowded, dull and cold. On the other hand, the advert shows Edinburgh to be clean, quiet and warm. The events that happened in London are mirrored in Edinburgh showing the comparison between the two cities. The music that is played throughout the advert is called Caledonia and it is non-diegetic as it is put on a soundtrack. The advert limits the market of selling Tennent?s Lager in London because of its negativity. Tennent?s Lager is mainly going to capture the attention of residents in Edinburgh because of its effectiveness. ...read more.