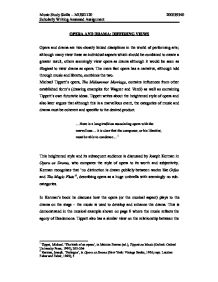 OPERA AND DRAMA: DIFFERING VIEWS Opera and drama are two closely linked disciplines in the world of performing arts; although many view these as individual aspects which should be combined to create a greater result, others seemingly view opera as drama although it would be seen as illogical to view drama as opera. The mere fact opera has a narrative, although told through music and libretto, combines the two. Michael Tippett's opera, The Midsummer Marriage, contains influences from other established form's (drawing examples for Wagner and Verdi) ...read more.

Kerman recognises that 'no distinction is drawn publicly between works like Orfeo and The Magic Flute'2, describing opera as a huge umbrella with seemingly no sub-categories. In Kerman's book he discuses how the opera (or the musical aspect) plays to the drama on the stage - the music is used to develop and enhance the drama. This is demonstrated in the musical example shown on page 8 where the music reflects the agony of Desdemona. Tippett also has a similar view on the relationship between the music and the drama, stating that: 'in opera the musical schemes are always dictated by the situations'3 Although opera has been established ...read more.

In this instance, the drama contrasts the opera as simple contrasts against the complexity of the score. Kerman comments upon this analysis of opera as drama and opera as a musical piece of entertainment, writing... More popular writers on music eschew, indeed scorn, any close analytic approach to opera. Having no dogma and no intractable mass of detail, they lose the work of art in other ways.4 Although scholars, composers and music writers alike would argue the case of opera as drama, it seems there is no right or wrong answer. It is certain that opera could not function without drama, however, the necessity for combining these two genres for purposes of analysis seems somewhat contrived. ...read more.