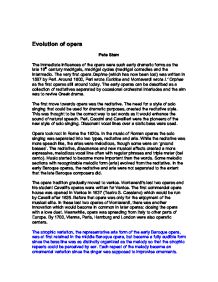 Evolution of opera Pete Stam The immediate influences of the opera were such early dramatic forms as the late 16th century madrigals, madrigal cycles (madrigal comedies and the intermedio. The very first opera Daphne (which has now been lost) was written in 1597 by Peri. Around 1600, Peri wrote Euridice and Monteverdi wrote L' Orphea as the first operas still around today. The early operas can be described as a collection of recitatives separated by occasional orchestral interludes and the aim was to revive Greek drama. The first move towards opera was the recitative. The need for a style of solo singing that could be used for dramatic purposes, created the recitative style. This was thought to be the correct way to set words as it would enhance the sound of natural speech. Peri, Caccini and Cavallieri were the pioneers of the new style of solo singing. Dissonant vocal lines over a static bass were used. Opera took root in Rome the 1620s. In the music of Roman operas the solo singing was separated into two types, recitative and aria. While the recitative was more speech like, the arias were melodious, though some were on 'ground basses'. The recitative, dissonance and new musical effects created a more expressive, melodious vocal line often with regular phrases and triple meter (bel canto). Music started to become more important than the words. Some melodic sections with recognizable melodic form (aria) evolved from the recitative. In the early Baroque operas, the recitative and aria were not separated to the extent that the late Baroque composers did. The opera tradition gradually moved to venice. Monteverdi's last two operas and his student Cavalli's operas were written for Venice. ...read more.

The arias were in the closed da capo aria form which inhibited the dramatic flow. From Handel to Mozart, many composers used librettos written by Zeno or Metastasio in their opere serie in the eighteenth century. Adolf Hasse was acknowledged as possibly the most eminent composer of the Metastasian kind of opera seria. By the time of high Classicism, following Gluck's operatic reforms, opera seria died out. Opera buffa and rescue opera took over (discussed below). In the beginning of the eighteenth century, opera comique (opera buffa as opposed to opera seria) was created in Naples. It became extremely popular and successful in the early years of the eighteenth century in Naples in the works of such composers as Pergolesi. His intermezzo La Serva padrona (1733) achieved enormous popularity and affected the subsequent history of opera. Opera buffa was characterized by a raciness and exuberance, naturalness and spontaneity, a simple directness and charming fluency. Intermezzi and opera buffa differed fundamentally from opera seria in that they showed awareness of changing trends in drama and literature, and took account of them in their use of subject matter. Many of the plots gained a more down-to-earth nature. The da capo aria was disregarded in favor of less closed forms. Altogether, the dramatic nature of the opera was made more apparent. Christoph Willibald von Gluck (1714-1787) and his followers upgraded the instrumental preludes in the opera. The overture had been a neutral piece without any link to the following opera (except some of Rameau's overtures). It now assumed a programmatic character, anticipating the mood of the first scene or portraying in pure sound the hole of the drama that was going to unfold. ...read more.

Choral and orchestral contribution gained importance. The French grand opera was based primarily on plots from recent European history. It was a combination of stage spectacle, music involving large ensemble-choral scene complexes and stunning ballets alongside the usual recitatives, arias, duos, etc. of the traditional opera. It is usually cast in five acts. In the dramatic unit -tableau- of the grand opera, there is no neat alternation of action and repose, as in traditional recitative-da capo aria structure, but rather a gradual intensification of the dramatic pace up to a climax. Perfect cadences with structural importance occur only at the end of each tableau. As a result of French operatic ballet tradition, the orchestration is more colorful than its Italian counterpart. Although the aria remained in favor of opera composers -not necessarily as the unit of dramatic action- throughout the first half of the nineteenth century, Wagner discarded it more or less completely while Verdi continued to use it except in his last two operas (Otello and Falstaff). In such operas, it is hard to separate an aria from the music as the whole act is the unit of continuous drama. Richard Wagner, the last great reformist in opera history, visualized the form as a union of arts: poetry, drama, music, staging. He renamed the opera as music drama. The uncompromised continuity brought realism in the dramatic form. He is also the creator of leitmotif which by associating a musical motif with a character, idea or event, brings cohesion to the opera. In Wagner's operas, the orchestra became part of the whole drama. It is said that Wagner brought the symphony orchestra to the opera house. Although Wagner emphasized the equality of the arts in his operas, it is the music which is supreme. ...read more.