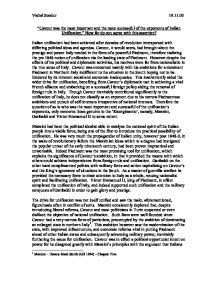 &quot;Cavour was the most important and the most successful of the exponents of Italian Unification&quot; How far do you agree with this assertion?

"Cavour was the most important and the most successful of the exponents of Italian Unification." How far do you agree with this assertion? Italian unification had been achieved after decades of revolution interspersed with differing political ideas and agendas. Cavour, it would seem, had brought about the prestige and power Italy needed in the form of a powerful Piedmont, therefore realizing the pre 1848 notion of unification via the leading state of Piedmont. However despite the effects of his political and diplomatic activities, his motives were far from nationalistic in the true sense of Italy. Cavour was concerned mainly with his ambitions for a dominant Piedmont in Northern Italy indifferent to the situation in the South hoping not to be hindered by its inherent social and economic inadequacies. This inadvertently aided the wider drive for unification, benefiting from Cavour's diplomatic tact in achieving a vital French alliance and embarking on a successful foreign policy aiding the removal of foreign rule in Italy. ...read more.

Mazzini consistently deplored that, despite introducing liberal reforms, Cavour and most politicians in Turin suspected or even disliked the objective of national unification. Such fears were well founded since Cavour had a very narrow form of patriotism, preoccupied by the ambition of dominating an enlarged state in northern Italy1. This ambition however saw the modernization of the state, with improved infrastructure, and economic reforms vital in putting Piedmont ahead of other Italian states and subsequently advancing military power, inevitably furthering the cause for unification. Cavour was in effect a political opportunist intent on power for he disagreed greatly with Mazzini's principles with the argument that Italians could not achieve independence by themselves, tactfully omitting the fact that if they did attempt a dangerous 'levee en masse'2, Piedmont's conservative constitution and her dominant position in Italy would be greatly threatened and possibly destroyed. In order to ensure his position, he adopted certain underhand tactics such as falsely abetting with some of Mazzini's party in order to undermine their efforts and exploit any success that they might achieve. ...read more.

In conclusion it seems that Garibaldi was the most important and successful exponent in the unification of Italy. His combination of political adeptness, charismatic leadership and military competence played a major role in first conquering and unifying the South then prompting the unification of Italy as a whole. In 1860 Garibaldi set sail for Sicily with his 'thousand', volunteer army in the name of Victor Emmanuel II in order that the unrest created would provoke Piedmont to commit to the impoverished South, which Cavour had failed to address previously. Garibaldi's capture of Palermo, as well as arousing immense enthusiasm in public opinion, was proof that the Mazzinian idea of national unification might no longer be a utopian dream3. Cavour was not an exponent of Italian unification. He was merely pressurized into thinking on a broader more national level by Mazzini and Garibaldi who were vigorously intent on unification. If it were not for the sharp actions of Garibaldi and the legendary 'thousand' the north and south may not have been tied to form a unified Italian state so soon. ...read more.