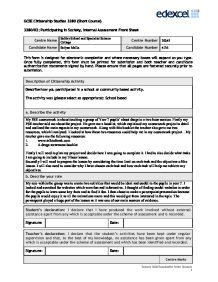 GCSE Citizenship Studies 3280 (Short Course) 3280/02: Participating in Society, Internal Assessment Front Sheet Centre Name Saltley School and Specialist Science College Centre Number 20243 Candidate Name Sufyan Mulla Candidate Number 4136 This form is designed for electronic completion and where necessary boxes will expand as you type. Once fully completed, this form must be printed for submission and both teacher and candidate authentication statements signed by hand. Please ensure that all pages are fastened securely prior to submission. Description of Citizenship Activity Describe how you participated in a school or community based activity. The activity was (please select as appropriate): a. Describe the activity My PSE coursework is about teaching a group of Year 7 pupils' about drugs in a two hour session. Firstly my PSE teacher told me about the project. He gave me a booklet, which explained my coursework project in detail and outlined the main aspects in my coursework. Along with this booklet the teacher also gave me two resources, which I analysed. I looked at how these two resources could help me in my coursework project. . My teacher gave me the following resources: 1. www.talktofrank.com 2. A drugs awareness booklet Firstly I will need to plan my project and decide how I was going to complete it. I had to also decide what tasks I am going to include in my 2-hour lesson. Secondly I will need to prepare the lesson by considering the time limit on each task and the objectives of the lesson. I will also need to consider why I have chosen each task and how each task will help me achieve my objectives. b. Describe your role My role within the group was to create two activities that would be ideal and useful to the pupils in year 7. I looked and searched for websites which were fun and informative. I thought of finding useful websites in order for the pupils to learn some key facts and to find it fun. ...read more.

We then got together and started brainstorming of what we could do. This was a good idea as we were jotting down all our ideas and this was an advantage. Group April 2008 3) We all chose what we were going to do and strated planning our activities. I chose to find educational websites and create a powerpoint presentation. Group April 2008 4) We then talked as a group if anyone was having any difficulty and if they needed any help. Group April 2008 5) I went on the internet to find a couple of educational websites for the pupils in year 7. This would increase their knowledge and understanding about smoking. In order for me to get educational websites I had to find a website which was fun so that they would be interested in the topic. Individual April 2008 6) I started to plan for my PowerPoint Presentation and I went on the internet to get some useful pictures which were animated so that the pupils in year 7 would be interested and not get bored. Individual April 2008 Analyse what was involved in each activity (the people involved, what you were trying to achieve etc). Describe how the importance and influence of citizenship issues is shown in your activity. The first activity was a simple word search which our group leader; Mohammed Abdul Jaleel downloaded from the Internet. This was just a quick and simple starter so that the pupils in year 7 knew what the topic was about. This would get the pupils in year 7 a feel of what we were going to talk to them about. The second activity was that we as a group read the non smoking booklet to the pupils in year 7. As the pupils were not shy they opted to read and this would have encouraged them to open up and talk about their ideas about smoking. ...read more.

Evaluation of the contribution of others to the activity Mohammed Abdul Jaleel and Kamran Uddin contributed well in this topic about smoking. We were all interested in this topic as lots of youngsters start smoking at an early age.We wanted to stop that by giving them valuable information. We were also interested in this topic as pupils in our school smoke. Our group leader was Mohammed Abdul Jaleel and he was a good leader as he always used to ask us how much work we have done also he is very organised. He contributed by getting valuable information from the NHS and Frank and he used to ask us if we were struggling.Kamran Uddin was struggling a little bit as he could not put the reserach together so I helped him. We all helped each other from getting research from the internet. We were all pleased with the finishing activities but we could have done some extra activities. Mohammed Abdul Jaleel showed true leader skills as he was always on our backs by asking us to show him the work that we have done so far. Kamran was a bit slow but eventually he produced colourful posters which we used. He was being lazy and expected myself and our team ledaer Mohammed Abdul Jaleel to do his work. I got really annoyed and told him politely that he was putting the group down. I also told him that I want to achieve a top grade in this subject and that he needed to get his act together. We were honest when we told the pupils in year 7 the truth about smoking. The wordsearches that Mohammed Abdul Jaleel downloaded was not a fun starter as finding words does get boring. He could have come up with something more creative. As a group we did well some of the activities could have been improved. ?? ?? ?? ?? Summer 2006 Examination Series Onwards 1 ...read more.