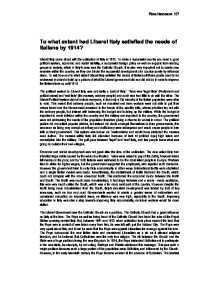 To what extent had Liberal Italy satisfied the needs of Italians by 1914? Liberal Italy came about with the unification of Italy in 1870. To make a successful country you need a good political system, economic and social stability, a successful foreign policy as well as support from leading groups in society, which in Italy's case was the Catholic Church. It is also very important not to create new enemies within the country, as they can hinder the successful development of a country purely by influence alone. To ask how and to what extent Liberal Italy satisfied the needs of Italians all these points need to be addressed in order to build up a picture of what the Liberal government did and did not do in order to improve the Italians lives up until 1914. The political system in Liberal Italy was not really a 'part of Italy.' There was 'legal Italy' (Parliament and political class) and 'real Italy' (the masses, ordinary people) and each side had little to do with the other. The Liberal Political system did not include everyone, in fact only a 2% minority of the Italian population were able to vote. This meant that ordinary people, such as industrial and farm workers were not able to get their voices heard and the Government remained in the hands of the ...read more.

The development of the industry in the North in the 1880s and 1890s was corresponded to the founding of trade unions and co-operative organisations. Many of these groups became involved in the Socialist-controlled General Confederation of Labour (CGL). This movement developed, and by 1900 there was an organised Socialist party, the PSI (Italian Socialist Party). The Socialists held the belief in country where the good of the people as a whole is stressed over individual rights, and in some forms is seen as a step on the way to communism. The Socialist party began winning seats in Parliament, and by 1913 he PSI was winning over twenty percent of the total vote. Within the political (PSI) and the industrial (CGL) wings of the labour movement, there were splits between moderates and revolutionaries. The moderates argued that peaceful pressure could gain reforms, while the revolutionaries argued that the PSI should strive to achieve its full programme. There was another group known as the Syndicalists, who believed that unions should organise strike to overthrow the system, some of their ideas would later contribute to Fascism. The development of the Socialists frightened people in Italy, especially because of it being associated in communism, which is the belief in a society where all are equal and there is no private property. ...read more.

Looking at all the evidence and events that occurred after the unification of Italy in 1890 I conclude that Liberal Italy did satisfy Italians, but only to a certain extent, as there were many unresolved issues by 1914. I think that the fact that 'Red Week' took place in June 1914 highlights that there are a number of issues that the Liberal government failed to satisfy. There were many opposition groups to the Liberal government, including the Catholic Church and Socialists. The Catholic Church was particularly important because it held such a major influence over the Italian population. The Socialists were gradually becoming more of a problem, because of the growth of the party, especially towards 1914. Many people would have looked to the Socialists after finding little satisfaction with the Liberal government. Besides the fact that there was a certain degree of dissatisfaction amongst Italy's population, the Liberal government was not all bad and did improve some areas of people's lives, and it was Giolitti in particular that made the most changes with his reforms. So it is not fair to say that Liberal Italy did not satisfy the needs of Italians, but nor is it correct to say that Liberal Italy did satisfy the needs of Italians. Liberal Italy satisfied some of the needs of Italians, but it could have done a lot more to improve their lives up until the year of 1914. ?? ?? ?? ?? Fiona Henderson 127 ...read more.