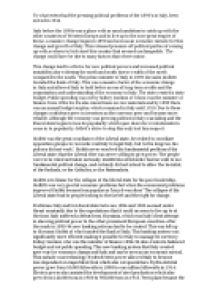 To what extent had the pressing political problems of the 1890's in Italy, been solved in 1914

﻿To what extent had the pressing political problems of the 1890's in Italy, been solved in 1914 Italy before the 1890s was a place with so much ambition to catch up with the other countries of Western Europe and to live up to the once great empire of Rome. A massive change began in 1890 and seen as an economic miracle for this change and growth of Italy. This released pressure off political parties of coming up with a reform to kick-start this country that seemed unchangeable. The change could have be due to many factors that where minor. This change lead to a thrive for new political powers and increased political instability also widening the north and south due to wealth of the north compared to the south. ...read more.

Giolitti never resolved the fundamental problem of the Liberal state: that the Liberal elite was never willing to give power. The people were to be ruled not taken seriously, Giolitti like all Liberals 'had no wish to see fundamental political change, and certainly did not intend to allow the Socialist, of the Radicals, or the Catholics, or the Nationalists. Giolitti is to blame for the collapse of the liberal state for his poor leadership. Giollitti was very good at economic problems but when the economical problems improved Giolitti became less popular as ?his job was done? The collapse of the Liberal state lead to people looking to the far left and the right for change. Problems: Italy and its Liberal state between 1896 and 1900 seemed under threat constantly due to the expectations that it could no seem to live up to at the time. ...read more.

Electric power also assisted the development of steel production which also grew from 140,000 tons in 1900 to 930,000 tons in 1913. Terni plant became the biggest steel plant in the world to be totally dependent on hydroelectric power. The government?s policies where a massive impact on this surge of change in production. The production of steel and iron gave way for massive transport imporvments with state-owend railways. This new industrial Italy also allowed improvement in the argricultral industry. As before produciont was based on man made where as by 1914 most silk, cotton and wool became mechanized. This change in production although changing Italy economically caused massive political problems, the south and north divide was on the increase with the north ?looking down upon? the south causing the politics to be very different with the more upper class citezens and industrial part was in the north and agricultarl and less populated in the south. ...read more.