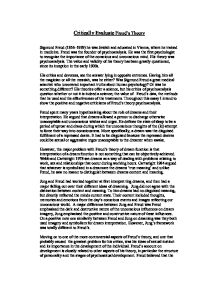 Critically Evaluate Freud's Theory Sigmund Freud (1856-1939) he was Jewish and educated in Vienna, where he trained in medicine. Freud was the founder of psychoanalysis. He was the first psychologist to recognise the importance of the conscious and unconscious mind. His theory was psychoanalysis. The value and validity of his theory has been greatly questioned, since its inception in the early 1900s. His critics and devotees, see the answer lying in opposite extremes. Having him all the magician or all the messiah, was he either? Was Sigmund Freud a great medical scientist who uncovered important truths about human psychology? Or was he something different? His theories offer a science, but his critics of psychoanalysis question whether or not it is indeed a science; the value of Freud's data, the methods that he used and the effectiveness of the treatments. Throughout this essay I intend to show the positive and negative criticisms of Freud's theory psychoanalysis. Freud spent many years hypothesizing about the role of dreams and their interpretation. He argued that dreams allowed a person to discharge otherwise unacceptable and unconscious wishes and urges. He defines the state of sleep to be a period of uproar and chaos during which the unconscious thoughts of the (Id) attempt to force their way into consciousness. ...read more.

If we are unaware of the forces that guide us, then it follows that we are not capable of intervening to change or go against them. (Slife&Williams 1995). Jung and Adler disagreed with Freud about the idea of such a pervasive sexual instinct, and proposed their own ideas of what motivated human behaviour. Grunbaun(1986) believes that the reasoning on which Freud based his entire psychoanalytic theory was "fundamentally flawed, even if the validity of his clinical evidence were not in question" but that "the clinical data are themselves suspect; more often than not, they may be patients responses to the suggestions and expectations of the analyst". Additional critics contend that Freud's clinical data are flawed or invalid. Greenberg (1986) believes that Freud's case studies do not place enough stress on revealing the outcome of the treatment and that Freud's aim was more to illustrate his theoretical points. In addition Freud fully presented only 12 cases, but mentioned over 100 minor cases. Greenberg asserts that many of the presented cases would not even be considered acceptable examples of psychoanalysis, and that all of Freud's cases had basic shortcomings. Finally Greenberg finds it "both skirting and curious that Freud chose to illustrate the usefulness of psychoanalysis through the display of unsuccessful cases" Other powerful critics, (Colby 1960) ...read more.

Finally to evaluate the critics Grunbaun (1986) asserts that "while psychoanalysis may thus be said to be scientifically alive, it is currently hardly well". The criticisms of Freud's theory can be grouped into three general categories. First, critics contend that Freud's theory was lacking in empirical evidence and relies too heavily on therapeutic achievements, whereas others assert that even Freud's clinical data are flawed, inaccurate and selective at best. Second, the actual method or technique involved in psychoanalysis, such as Freud's ideas on the interpretation of dreams and the role of free association, have been criticised. Finally, some critics assert that psychoanalysis is simply not a science and many of the principles upon which it is based are inaccurate. Eysenck and Wilson (1973) there is not one study which one could point to with confidence and say "Here is definitive support of this or that Freudian notion." In conclusion many of the critics and devotees of Sigmund Freud all have valuable opinions, to which I have shown throughout this essay. However, despite the weaknesses of psychoanalysis I believe that the many strengths of the theory are extremely significant and have withstood the test of time and are widely used today. Therefore in my own opinion psychoanalysis should not be disregarded. Although many criticisms exist, there are as many arguments, if not more, in support of the rich and diverse contributions that Freud's theory gave to psychoanalysis. His legacy lives on indisputable form. ...read more.