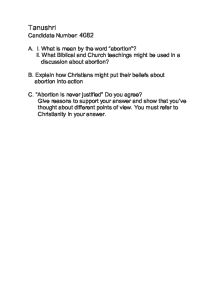 Although it could also be applied to the mother, she, as "thy neighbour", has the choice to whether she wants to carry the unborn child or not. It is her body and the final decision lies with her. This reference would therefore justify abortion when the mother has made the decision to have an abortion and has not been forced into it. "Love thy enemy as you do thyself" Even if you don't yet have any feelings about the foetus, or whatever feeling you do have must be put aside and you have to love it. You should love it as you love yourself. If you wouldn't like anyone else to take your life then you have to take into account that you will be taking the life away from someone else. "Do to others whatever you would have them do to you." The golden commandment is an essential "law" for Christians and breaking it wouldn't make then a true Christian. In the topic of abortion this is a vital component in making the right decision. You have to take into account the feelings of others. Abortion can be seen as murder/ the taking or another human beings life. If someone else doesn't have the right to take your life then you surely don't have the right to take another persons life. Pg 8 Part B: How Christians might put their beliefs about abortion into action! All Christians see the question of abortion as a moral issue, its either right or wrong, it has become so hard to make a law that everyone will be happy with because of the differences in opinion. All Christians are guided by a belief in the sanctity of life, it is a sort of guide to how Christians should view life. This means that many will believe having an abortion is wrong because life is seen as sacred. ...read more.

I believe that the mothers say should be the last say. The foetus may be considered a human being or a "potential human being" (which ever you believe) but it still can't talk for its self. Parents all over the world make decisions for their babies and even if it turns out not to be the best decision, they still made it with their best intentions at heart. If no-one trusts the mothers decision to have an abortion as the best decision for them, why trust then t have a child at all, this would result in a very low birth rate! I think that people should do all they can to lower the abortion rate but still listen to the mothers decisions. At the moment many mothers-to-be are aborting their pregnancies due a lack of support. If we had more services that specially targeted women who need social and/or financial support to be a mum, the number of abortions may go down meaning the government doesn't need to spend as much money on free abortions but could spend it on ways to get the abortion rate down. Although I agree with the pro-choice argument, I think the time limit should be lowered to 18 weeks. A pregnancy study shows that foetus' may be able to feel pain at the 18 week stage. If an abortion is carried out beyond this point the foetus may be able to feel pain, this would mean we are harming the foetus. It has not yet been fully proved; studies are still being carried out. I also think that the time limit should be lowered because at 24 weeks the foetus is viable, meaning if it were born it has a chance of surviving. The most premature child to survive is 23 weeks, so if someone were to have an abortion at that stage in their pregnancy, the unborn child may have been viable to live! ?? ?? ?? ?? ...read more.