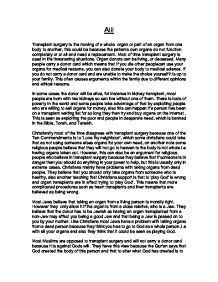 Transplant surgery is the moving of a whole  organ or part of an organ from one body to another, this could be because the patients own organs do not function completely or at all and need a replacement. Most of time transplant surgery is used in life threatening situations. Organ donors can be living, or deceased. Many people carry a donor card which means that if you die other peoplecan use your organs for medical reasons, you can also donate your body to medical science. If you do not carry a donor card and are unable to make the choice yourself it is up to your family. This often causes arguments within the family due to different opinions and ethical reasons.

In some cases the donor will be alive, for instance in kidney transplant, most people are born with two kidneys so can live without one of them. There is losts of poverty in the world and some people take advantage of that by exploiting people who are willing to sell organs for money, also this can happen if a person has been on a transplant waiting list for so long they then try and buy organs on the internet . This is seen as exploiting the poor and people in desperate need, which is banned in the Bible, Torah, and Tenakh.

Christianity most of the time disagrees with transplant surgery because one of the Ten Commandments is to ‘Love thy neighbour’, which some christians could take that as not using someone elses organs for your own need, on another note some religious people believe that they will not go to heaven is the body is not whole i.e having organs taken out. However, this can also be an argument for religious people who believe in transplant surgery because they believe that if someone is in danger then you should do anything in your power to help, but this is usually only in extreme cases. Christians mainly have problems with taking organs from dead people. They believe that you should only take organs from someone who is healthy, also another teaching that Christians support is that to ‘play God’ is wrong and organ transplants are in effect trying to ‘play God’. This means that more complicated procedures such as heart transplants and liver transplants are believed as being wrong.

Most Jews believe that taking an organ from a living person is morally right. However they  only allow it if the organ is from a close relative, who is a Jew. They believe that the donor has to be Jewish as having an organ transplanted from a non-Jew may affect you being a good Jew and that being a Jew is passed on to you by your mother. Like Christians most Jews have a problem with taking organs from a dead person because they think you hae to go to God as a whole person, i.e with all your organs and also they think that it could be seen as playing God.

Most Muslims are opposed to transplant surgery and will not carry a donor card because it is against Gods will. They have this view because the Qur’an says that God created the body of this person and that to alter what God has created is to ‘play God’. This is seen as the greatest sin of Muslim beliefs.

Many religious people agree with some non-religious views on transplant surgery. These arguments include that transplants are very expensive and so very few people can have the surgery. They believe that it is wrong that poor people will not be able to have transplant surgery and richer people may. It also raises the debate on when a person is classed as dead. This only causes problems for things like heart transplants, which require the heart to be removed before it has stopped beating. It also raises the moral problem, in which it questions whether surgeons will work to the best of their ability to save the life of both the patient of the potential donor.