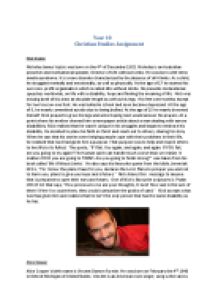 ﻿Year 10 Christian Studies Assignment Nick Vujicic Nicholas James Vujicic was born on the 4th of December 1982. Nicholas is an Australian preacher and motivational speaker, Director of Life without Limbs. He was born with tetra-amelia syndrome. It is a rare disorder characterized by the absence of all 4 limbs. As a child, he struggled mentally and emotionally, as well as physically. At the age of 17 he started his own non- profit organisation which is called Life without Limbs. He presents motivational speeches worldwide, on life with a disability, hope and finding the meaning of life. Nick was missing both of his arms at shoulder length as well as his legs. His feet were toeless except for two toes on one foot. He was bulled in school and soon became depressed. At the age of 8, he nearly committed suicide due to being bullied. At the age of 10 he nearly drowned himself. Nick prayed to grow his legs and arms hoping God would answer his prayers. At a point where his mother showed him a newspaper article about a man dealing with severe disabilities, Nick realised that he wasn?t unique in his struggles and began to embrace his disability. He decided to place his faith in Christ and reach out to others, sharing his story. ...read more.

And you will receive the gift of the Holy Spirit. Vincent attended Washington Elementary School, then Nankin Mills Jr. High, then Lutheran High School in Westland. Because of Alice?s childhood illnesses, Furnier moved with his family to Phoenix, Arizona, where he attended Cortez High School in north Phoenix. Vincent (Alice) had gained access into the University of Arizona, University of Colorado and University of California-Davis ? he declined all these offers. Vincent (Alice) became an alcoholic when he started his music career and drank deeply for the next 15 years. He has being striving to quit alcoholism with the help of his wife since he has become addicted to it. Here is a scripture I thought it would go with his addiction to alcoholism and how he believed in there was a God and so on. Psalm 40, 2:4 He lifted me out of the pit of destruction, out of the sticky mud. He stood me on a rock and made my feet steady. He put a new song in my mouth, a song of praise to our God. Years ago it was a shock to the world as people heard that the rock star was embracing Christianity. He became Christian in the 1980s. Vincent believes that being a Christian is something you just develop in. He quotes,? you learn. You go to your bible studies. You pray?. Alice views his Christian beliefs as an on- going thing. ...read more.

________________ Martin Luther King Martin Luther King was born on the 15th January 1928 and died in 1968. He was an American clergyman, activist, and prominent leader in the African American civil rights movement. He is best known for his role in the advancement of civil rights in the United States and around the world using non violent methods following the teachings of Mohandas Karamchand Gandhi. Dr. King?s commitment to the bible as his primary source book was nourished in his childhood when Bible stories told around the dinner table held the King children in awe. Those stories sustained him until the end of his life. Because of his Christian beliefs, Martin Luther King worked towards equality by organising non-violent protests. He believed that it was never right to use violence, because this does not express the love of God, it expresses just hatred. Here are the quotes to his equality, ?I see very clearly that God doesn't show partiality. In every nation he accepts those who fear him and do what is right.? (Acts chapter 10 verses34-35). Paul said 'From one man he created all the nations throughout the whole earth.' (Acts chapter 17 verses 26). Martin believed that true Christianity was tolerant, humane, egalitarian and unprejudiced. King's essential message was that your race, colour, creed or nationality was irrelevant- what mattered was the sort of person you were inside. By Theresa C ...read more.

This student written piece of work is one of many that can be found in our GCSE Christianity section.