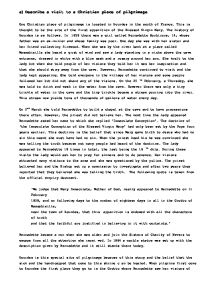 Describe a visit to a Christian place of pilgrimage

a) Describe a visit to a Christian place of pilgrimage One Christian place of pilgrimage is located in Lourdes in the south of France. This is thought to be the site of the first apparition of the Blessed Virgin Mary. The history of Lourdes is as follows. In 1858 there was a girl called Bernadette Soubirous, 14, whose father was an ex-miller and whose family was poor. One day she was with her sister and her friend collecting firewood. When she was by the river bank at a place called Massabieille she heard a gust of wind and saw a lady standing in a niche above the cave entrance, dressed in white with a blue sash and a rosary around her arm. She knelt to the lady but when she told people of her visions they told her it was her imagination and that she should stay away from the cave. However, Bernadette continued to visit and the lady kept appearing. She told everyone in the village of her visions and some people followed her but did not share any of the visions. On the 25th February, a Thursday, she was told to drink and wash in the water from the cave. ...read more.

Lourdes is this special site of pilgrimage because of this story and the belief that the sick and the handicapped that come to this shrine can be healed. When pilgrims first come to Lourdes the first place they go to is the Grotto where Bernadette saw her visions of the Virgin Mary. The Grotto is placed in an area called the domain and it includes the important churches, buildings and hospitals in Lourdes. Anyone who enter the Domain is asked to remember that it is a place of pilgrimage and that people go there to pray or for silence. Inside the Grotto there is s small altar and above it to the right is the statue of the Virgin Mary, standing approximately where Bernadette saw her visions. When pilgrims visit this part of Lourdes they often take it in turns to touch, stroke or kiss the stone beneath the statue. They can also leave requests for help and prayers. Behind the altar the spring which the apparition asked Bernadette to dig is placed. The cave has an atmosphere of love and concern. There is usually a large crowd yet there is silence and respect for those praying. ...read more.

This is a reminder of when the lady asked Bernadette to scratch the ground and wash and drink the water there. This would remind them of the story and how Bernadette felt at the time. After drinking this water people have told stories of miracle cures, of people who could not walk but after visiting Lourdes were suddenly able to and people who were blind being able to see gain. Pilgrims can also walk the 14 Stations of the Cross, reminding them of the 14 stages of Christ' journey. There are life size bronze figures to remind them of each station and many people walk this barefooted to show that they are sharing in Jesus, suffering and showing their sorrow for their sins. Pilgrims can also visit Bernadette's grave where her body lies. This would be important for many pilgrims because they can see the person who had the Blessed Virgin Mary appear to her many times and was the reason for them all visiting Lourdes year after year. Every year thousand upon thousands of pilgrims visit Lourdes to learn more about these visions and the story of Bernadette. Each site in Lourdes holds a particular story for the history of the place and is a very important site of pilgrimage for any Christians in the world. ...read more.