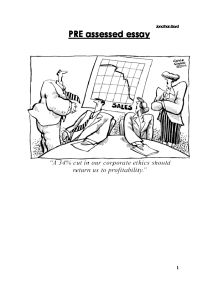 Jonathan Lloyd PRE assessed essay The smallest wonder Amillia, born only 21 weeks and six days after conception, is the most premature baby ever to survive. In England the cut-off point for abortion with no medical reason is 24 weeks, Amillia is destined to grow into a healthy human being, and so does abortion amount to murder? Buddhist A Buddhist would say that all life is sacred and should never be taken away, and to have an abortion would amount to murder and as such would place the worst kind of bad karma upon your soul. The first Buddhist precept is do not kill, this is to say that to take the life of any living creature is wrong and because they believe in ensoulment at birth that even a foetus is considered living. However, they would also say that intention is a great factor and as such if you mean well and spare the mother or the child future pain then abortion may not give as much bad karma. Utilitarian A utilitarian would say that this proves that the abortion cut-off point is too long because no amount of pain on the parent's part would ever account for all of the pleasure in the child's life. However if the child was to be handicapped and would not have the ability to live with an acceptable quality of life then it would cause less pain overall to abort the birth. ...read more.

In order to follow the first precept we should not harm any living being and if we pollute our planet and make it uninhabitable by global warming we are, by proxy harming the life upon it which would douse every soul who is apathetic to this issue with a large amount of bad karma, thus making this an ethical issue rather than purely scientific. Utilitarian A utilitarian would say that if we destroy our planet's ecosystem then we will also cause a large amount of suffering and even death to the people who live upon it and are therefore causing much more pain than any pleasure that could ever be generated by the use of the technology that creates that pollution. Allowing it to continue therefore is unethical. Kantian A Kantian would say that we have a duty to protect our planet and that if all humans were to allow global warming to continue then we would be in a negative position and as such it is in breach of the rule of university. He would also say that by allowing our planet to fall into a state of disrepair we are also in breach of our duty to protect the human race. As such, in Kant's opinion, this is most definitely an ethical issue. Christian A Christian would say that since the earth is God's creation we have a moral duty to keep it in good order, because all of God's creations are inherently sacred. ...read more.

However he would also say that we have a duty to protect world piece so unless the opposition is in threat of thus then the war is unethical. As for the Iraq war, Saddam may have been a threat to world peace due to the possibility of him being in possession of weapons of mass destruction. Christian A Christian would say that war is right as long as it is in the name of righteousness and as such if war is in the name of the lord or any Christian ideals then it is ethical. As for the Iraq war it was not in relation to the Christian God, however it was in protection of our allies and thus was protecting the weak and as such is, by Christian standards, ethical. Myself I believe that war and tribalism is in natural human instinct and that it is folly to deny this, as such war is a necessary and at some points is even a constructive solution. However I believe that as far as ethics goes, the Iraq war was not justified. In my opinion it was simply a poor excuse for an international scrap for oil and the only suspicions that they had weapons of mass destruction was that we sold them to them in the first place. It is strange that when no weapons were discovered in the more obvious areas that the search seemed to correlate quite consistently with the areas of the oil fields in that area... ?? ?? ?? ?? 1 ...read more.