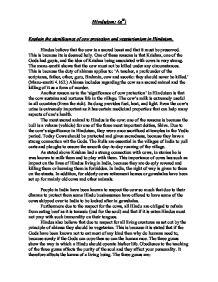 Explain the significance of cow protection and vegetarianism in Hinduism.

Hinduism: (aiii) Explain the significance of cow protection and vegetarianism in Hinduism. Hindus believe that the cow is a sacred beast and that it must be preserved. This is because its is deemed holy. One of these reasons is that Krishna, one of the Gods had gopis, and the idea of Krishna being associated with cows is very strong. The manu-smriti shows that the cow must not be killed under any circumstances. This is because the duty of ahimsa applies to: 'A teacher, a profounder of the scriptures, father, other, guru, Brahmin, cow and ascetic: they should never be killed.' (Manu-smriti 4.162.) Ahimsa includes regarding the cow as a sacred animal and the killing of it as a form of murder. Another reason as to the 'significance of cow protection' in Hinduism is that the cow sustains and nurtures life in the village. The cow's milk is extremely useful in all countries (Even the rich). ...read more.

In India, the right of way is given to them on the streets. In addition, for elderly cows retirement homes or gowshalas have been set up for mainly old cows and other animals. People in India have been known to respect the cow so much that due to their dharma to protect them some Hindu businessmen have offered to have some of the cows shipped over to India to be looked after in gowshalas. Furthermore due to the respect for the cows, all Hindu are obliged to refrain from eating beef as it is tamasic (bad for the soul) and that if it is eaten Hindus must not pray with such immorality on their tongues. Hindus also believe that due to respect for all living creatures as set out by the principle of ahimsa they should be vegetarian. This is because it is stated that if the Gods have been known not to eat meat of any kind then why do humans need to, because surely if the Gods can cope then so can the human race. ...read more.

Therefore, many Hindus are vegetarian due to the three gunas playing a very important part in the Hindu life, by affecting the devotion to God, and focussing on choosing the right path and following your dharma to achieve moksha. There are also medical reasons as to why Hindus refrain from eating beef. Eating meat is strongly associated with heart disease, some cancers, high blood pressure, and diabetes. The British government advocates more consumption of bread, cereals, potatoes and fruit, however not meat. Fish and white meant are better for the body than other kinds of meat. 90 % of the productive land in the western world is used to grow crops to feed just cattle. 8 Kg of grain protein fed to Animals produces 1kg of meat, which is such a waste when a 10% reduction in the production of meat could release enough grain to feed ten million people. The devastated Amazon forests (cleared for cattle ranching) and cash crops like sugar beet have made dramatic climatic changes to the world showing that the protection of the cow could be beneficial in many ways. ...read more.