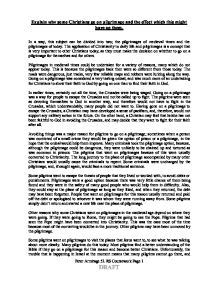 Explain why some Christians go on pilgrimage and the effect which this might have on them.

Explain why some Christians go on pilgrimage and the effect which this might have on them. In a way, this subject can be divided into two; the pilgrimages of medieval times and the pilgrimages of today. The application of Christianity to daily life and pilgrimages is a concept that is very important to other Christians today, as they must make the decision on whether to go on a pilgrimage for themselves and for others. Pilgrimages in medieval times could be undertaken for a variety of reasons, many which do not appear today. This is because the pilgrimages back then were so different from those today. The roads were dangerous, just tracks, very few reliable maps and robbers were lurking along the way. Going on a pilgrimage was considered a very testing ordeal, and was much more of an undertaking for Christians to show their faith to God by going on one than to find their faith in God. In earlier times, certainly not all the time, the Crusades were being waged. Going on a pilgrimage was a way for people to escape the Crusades and not be called up to fight. The pilgrims were seen as devoting themselves to God in another way, and therefore would not have to fight in the Crusades, which understandably, many people did not want to. ...read more.

The place that they visit has special religious value, and it may help the pilgrim to understand some of the things that happen in the Bible. This can mean that they take a more active part in their community or even completely devote their lives to God. Many pilgrims go on a pilgrimage like this when they are already Christian, with a strong faith, in order to make their faith stronger. A reason that is less common today than it was a long time ago is penance. When a Christian felt that he/she had done something wrong, they would "punish" themselves by going on a pilgrimage, to say sorry to God. Nowadays, pilgrimages are not so difficult, so penance is not so common. A pilgrim may find consolation once they have done that and may not feel guilty about what they have done. Many pilgrims would try and avoid doing anything wrong again in the future. Many Christians that had turned to crime decided to go on pilgrimages, and then went back to their law-abiding lives. Some pilgrims in the medieval times were sent on pilgrimages by the king. One of the reasons for this was to try and make the pilgrims servants to King Christians, and therefore make them less likely to betray them. ...read more.

Christians do this is order to sort out where religion comes in their life, and a Christian that visits a pilgrimage site often is usually more dedicated. Many Christians go on a pilgrimage just for the amazing experience of it. They haven't done it before but want to try it, many Christians that do this often find that pilgrimage is a great thing to do, and may become more committed in their lives to Christianity. Many Christians go on pilgrimages with a disabled person; they help them and make sure they gain from it. These people often gain greatly from the experience, and many go on to a life in the church. Many pilgrims go to Lourdes with a sick or disabled person. Some Christians go to say thank you to God for something. They want to do it in a special way, and going on a pilgrimage is indeed special. These pilgrims obviously have much faith in God already, increased by whatever they are saying thank you for, but they still usually gain from the experience spiritually. Some Christians go to meet people, as on a pilgrimage they can meet thousands of people, and many of them will be similar to them. Friendships can develop out of pilgrimages, as well as all the experience and faith that they gain from it. Peter Armitage 5L RS Coursework Page 1 DRAFT ...read more.