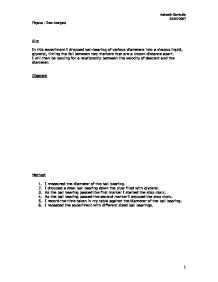 Dropping ball-bearing of various diameters into a viscous liquid, glycerol, timing the fall between two markers that are a known distance apart.

In this experiment I dropped ball-bearing of various diameters into a viscous liquid, glycerol, timing the fall between two markers that are a known distance apart.

I will then be looking for a relationship between the velocity of descent and the diameter.

Stokes Law states that spheres falling through a fluid exhibit the following relationship.

Viscosity – any object moving through a viscous fluid is acted on by friction due to the fluid.  A higher viscosity will increase this friction that opposes its motion.

Where R is the radius of the sphere, n is the viscosity of the fluid, and vc is the velocity of the sphere through the infinite fluid. This force can be set equal to the gravitational force modified to account for the buoyant effect as follows

Because there is therefore no acceleration