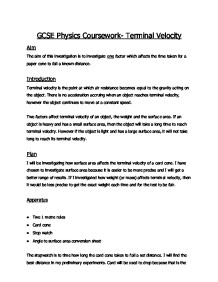 Investigate one factor which affects the time taken for a paper cone to fall a known distance.

The aim of this investigation is to investigate one factor which affects the time taken for a paper cone to fall a known distance.

Terminal velocity is the point at which air resistance becomes equal to the gravity acting on the object. There is no acceleration accruing when an object reaches terminal velocity, however the object continues to move at a constant speed.

I will be investigating how surface area affects the terminal velocity of a card cone. I have chosen to investigate surface area because it is easier to be more precise and I will get a better range of results. If I investigated how weight (or mass)

These are my preliminary experiment results from a drop height of two metres.

2 drop on the second attempt, causing the average for the three attempts to be higher. I would of liked to have taken the investigation further by investigating how weight affects terminal velocity so that I could be sure how these two variables affect terminal velocity together.

I think my results were reasonably reliable. There were some variables that I would have liked to have controlled a bit better, such as the drop height and drop method. The drop height was not exactly the same each time as it was hard to keep the rulers pointing straight up, one on top of the other. Also I would ideally have liked a mechanical drop method, which released the cone from exactly the same height each time and did not help the cone to fall in any way. Our experiment may not have been fair in that respect because we took terns in dropping the cone, therefore each having our own ‘precise’ way of dropping it. The same goes for our timing. We each took terns timing and everyone’s reaction times are different and it is therefore difficult to time the drop exactly as it is.

This is a good attempt at a report on a practical.
1. The introduction is well written but very brief.
2. The apparatus and fair testing sections are good.
3. The data is well presented in the tables but the graph is missing.
4. The conclusion does not cover all of the necessary aspects required.
5. The evaluation is well written but should also suggest extensions and include the anomalous results.
*** (3 stars)