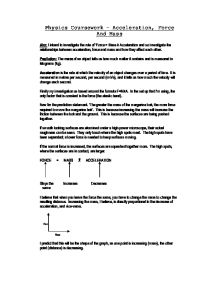 Prediction: The mass of an object tells us how much matter it contains and is measured in kilograms (kg).

Acceleration is the rate at which the velocity of an object changes over a period of time.  It is measured in metres per second, per second (m/s/s), and it tells us how much the velocity will change each second.

Firstly my investigation us based around the formula F=MxA.  In the set up that I’m using, the only factor that is constant is the force (the elastic band).

If smooth looking surfaces are examined under a high-power microscope, their actual roughness can be seen.  They only touch where the high spots meet.  The high spots have been separated; a lower force is needed to keep surfaces moving.

If the normal force is increased, the surfaces are squashed together more.

After that, I will place the box with the lid just in front of the elastic band.  Then using the Newton metre, I will measure the force that I am going to apply.  I am going to use a 10N force, as it is the most force it will take, and it is more likely to be able to launch the box further at the higher weights.  I must remember that it is a constant force because I said in my prediction that I was only going to have one variable in this experiment.  Two variables will just complicate the experiment and make it hard to find patterns in my results.  I shall prise the Newton metre away, but catch the elastic band in my fingers, still keeping it at 10N.  I shall slide the margarine box into the middle of the elastic band, as more kinetic energy is stored there, and without pulling it back, release the elastic band.  When the box has come to a complete stop, I will measure from the box’s back point, as this is how far the box has travelled.  I will record this result on a table, and to ensure credibility, I will repeat that experiment once more to catch out any ‘rogue’ results.

Measuring the distance for each weight was quite an unreliable task.  I used a metre stick, and without any guidelines, I had to roughly estimate where the back of the margarine box was.  This was a very unreliable method.  To counter this if I were to do improve this procedure, I would draw guidelines, using washable ink, every each half centimetre.  The fact that the results were rough estimates meant that they weren’t very credible compared to results that were measured accurately.

To sum up, I don’t think that my experiment was very reliable, if anything, it was flawed.  I think that next time, I should read the fair test steps and follow them more closely, and use the above corrections.  However, there was a subtle downward curve that required disposing results, but ultimately, the procedure can be greatly improved.  My conclusion couldn’t be that strong either and my hypothesis wasn’t proved, as there wasn’t enough evidence to do so.