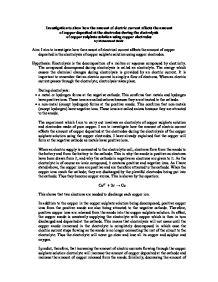 Instead my experiment took me three lessons to complete. This change of electrodes would have affected their surface areas which would in turn affect the rate of electrolysis. This problem could have been overcome if I had continued to conduct my experiment or if I had taken or reserved the electrodes that I had been using for my experiment. Another problem with my experiment was that I had to adjust the current with the rheostat while electrolysis was taking place. This meant that at first the current was lower than it should be and then it was adjusted. This could have produced some inaccuracies in my results. It would be more accurate to prepare the rheostat beforehand and thus have it ready on the precise current. Another inaccuracy was the water and propanone I used to clean the copper electrodes with. Because of the many experiments taking place and because many people had cleaned their electrodes so many times, the distilled water and propanone had become contaminated with copper sulphate solution which could be seen as both the distilled water and propanone had a blue tinge to them. This meant that some copper sulphate solution was still on my copper electrodes when I was drying them. This could have caused some inaccuracies in the weight of the copper electrodes but the difference would have been so minute, it could not have been detected on the weighing machine. I could solve this problem by changing the water and propanone each time. However, this would be extremely wasteful and quite unnecessary. There are some further methods that I could carry out in order to provide more evidence for my conclusions. I could, for example, use a different metal and a different electrolyte to see whether the same thing happens with any metal. I could, for example, have used silver electrodes and silver nitrate solution as my electrolyte. This would have further proven my hypothesis and provided me with more evidence with which I could draw general conclusions for all metals. ...read more.