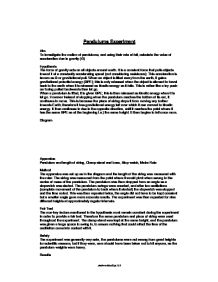 Pendulums Experiment Aim To investigate the motion of pendulums, and using their rate of fall, calculate the value of acceleration due to gravity (G) Hypothesis The force of gravity acts on all objects around earth. It is a constant force that pulls objects toward it at a constantly accelerating speed (not considering resistance). This acceleration is known as G or gravitational pull. When an object is lifted away from the earth, it gains gravitational potential energy (GPE); this is only released when the object is allowed to travel back to the earth when it is released as kinetic energy as it falls. This is rather like a toy push-car being pulled backwards then let go. ...read more.

The string was measured from the point where it would pivot when swung to the centre of mass of the pendulum. The pendulum was then dropped from an angle as a stopwatch was started. The pendulum swings were counted, and after ten oscillations (complete movement of the pendulum to back where it started) the stopwatch was stopped and the time noted. This was then repeated twice, the angle did not have to be kept constant but a smaller angle gave more accurate results. The experiment was then repeated for nine different heights at approximately regular intervals. Fair Test The non-key factors mentioned in the hypothesis must remain constant during the experiment in order to provide a fair test. ...read more.