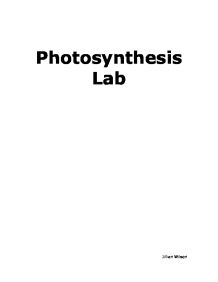 Photosynthesis Lab Jillian Wilson Framingham State College March 29th, 2002 Introduction Photosynthesis is a very important process. It uses sunlight, Carbon dioxide, and water to make food, and gain energy. The process occurs in three stages: the capturing on energy from sunlight, the formation of ATP (from that energy), and the synthesis of CO2 (by use of ATP). The equation for photosynthesis can be written as: 6CO2 + 12 H2O + light energy --> C6h1206 + 6O2 + 6H2O But why is it important? By releasing oxygen and consuming carbon dioxide, photosynthesis has transformed the world into the hospitable environment we know today. Both directly and indirectly, photosynthesis fills all of our food requirements and many of our needs for fiber and building materials. The energy stored in petroleum, natural gas and coal all came from the sun via photosynthesis, as does the energy in firewood, which is a major fuel in many parts of the world. This being the case, scientific research into photosynthesis is vitally important. In this lab, we studied the effects of light intensity on photosynthetic rate, and the relationship between color (essentially light wavelength) and photosynthetic rate. This was an interesting process as it involved the measuring of bubbles released from a plant under water, thus determining the rate of photosynthesis by the amount of oxygen released. The colors used in the experiment were red, blue, and green, which one might suspect, in that order, to result in consecutively less releasing of oxygen. ...read more.

The paper was allowed to dry thoroughly before adding the next layer, and six layers of chlorophyll extract were put on the paper. The cork/paper apparatus was then put into the test tube containing the solvent. After about 30 minutes, the solvent front was near the top of the strip, and we removed the strip, and made a pencil mark (allowing the location of the solvent front). We then let the chromatogram dry. When dry, we outlined the individual substances with a pencil. Effect of Light Intensity on Photosynthetic Rate We first filled a test tube with 0.5% NaHCO3. After doing so, we obtained a healthy green sprig of water plant Cabomba, and with a razor blade, made a diagonal cut acroos the stem about 6-8cm from the growing tip. The sprig was quickly placed in a test tube so that the cut end is up and about 3 cm from the top of the tube. Filling the wide-mouth jar containing the plastic form with water, we placed the tube containing the Cabomba and sodium bicarbonate in the plastic holder. The apparatus was placed about 30 cm from a lamp with a 75-Watt bulb. We then turned the lamp on, and when bubbles of oxygen began to regularly emerge from the cut stem, we began timing the number of bubbles produced in a 3-minutes interval. This was repeated for another 3-minute interval and the average of the two was then calculated. ...read more.

The method of testing each light bulb wattage twice and taking an average might be considered to be a control, though it seems to me that no control was involved in this experiment. The variables were the different watt level bulbs, and in the case of the colored light, the different color shields. Not all colors of light, or rather light wavelengths are equally effective at powering photosynthesis. The wavelengths that can be used are dependent on the absorption spectrum of the particular pigments used, but a generalized action spectrum for photosynthesis is shown on the next page, taken from: http://www.sidwell.edu/us/science/vlb5/Independent_Research_Projects/dwinik/index.html#hypothesis This graph does not completely correlate with our experiment, in that the green light showed a greater photosynthetic rate than the blue light. This seems to be improbable, based on the characteristics of chlorophyll pigments. Because we tested the green light first, it may be that there were more bubbles simply because it was the only variable to have fresh sodium bicarbonate solution. Absorption Spectrum of Chlorophyll Though the sudden increasing and decreasing absorbency ratings at low wavelengths and at high wavelengths was vaguely confusing, the absorption spectrum of Chlorophyll a and b taken from our data correlated well with the usual credited results taken from this graph on the web page: http://utweb.utampa.edu/faculty/kbeach/lightharvesting/sld006.htm The main differences were in the chlorophyll b readings. As seen from the data, chlorophylls a and b differ slightly in the wavelengths of light that they absorb best. Carotenoids help fill in the gap by strongly absorbing green light. ...read more.