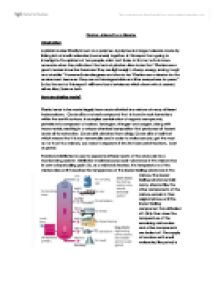 Plastics- A Benefit or a Disaster? (Science research coursework)

Plastics- A Benefit or a Disaster Introduction A plastic is scientifically known as a polymer. A polymer is a large molecule made by linking lots of small molecules (monomers) together. In this report I am going to investigate the opinions of two people, Alan and Susie, to find out who is more accurate when they talk about the facts of plastics. Alan states that "Plastics are a great modern invention because: They are lightweight, cheap, energy saving, tough and durable." However Susie disagrees and she states "Plastics are a disaster for the environment because: They are not biodegradable and litter everywhere for years." So by the end of this report I will have found evidence which shows who is correct, either Alan, Susie or both. How are plastics made? Plastic tends to be made largely from crude oil which is a mixture of many different hydrocarbons. Crude oil is a natural compound that is found in rock formations within the earth's surface. A complex combination of organic compounds, petroleum is composed of carbon, hydrogen, nitrogen and oxygen, along with trace metals, resulting in a unique chemical composition that produces oil-based crude oil for extraction. Crude oil is obtained from oil rigs. Crude oil is a fossil fuel which means that it is non-renewable and in order to make sure you get the most out of it as it is a mixture, you need to separate it into its more useful fractions, such as petrol. Fractional distillation is used to separate different parts of the crude oil, via a fractionating column. Distillation works because each substance in the mixture has its own unique boiling point. So, as a mixture is heated, the temperature of the mixture rises until it reaches the temperature of the lowest boiling substance in the mixture. The lowest boiling substance boils away. Meanwhile, the other components of the mixture remain in their original phase until the lowest boiling component has all boiled off. ...read more.

Reducing product weight with plastics gives you more parts per pound of metal, significantly reduces shipping costs and improves the ease of utilisation for the user. In addition, if you were to choose plastic over metal for building a strong house then in would in fact benefit you. This is because you can get products which are lightweight, easier to use and possess more structural strength. Plastic parts can be made stronger than metal via engineering. Reusing plastic is preferable to recycling as the recycling process uses big amount energy resources; however recycling is still better than littering it. Recycling plastics can have a significant contribution to the environment. This is because: * Reduces energy consumption by two thirds * Reduces water usage by 90% * Reduces carbon dioxide emissions by two and a half times Council recycling bins (green, brown and glass) are our local recycling scheme; however other schemes include recycling plants and recycling in school. These are a great way for you to involve yourself and help the environment. In addition there are also some national recycling schemes available to get yourself involved in. Waste cycle is a nationwide campaign that operates a recycling service providing waste solutions nationally. They arrange collection of your waste anywhere in the UK using local waste management companies, who help with service and vehicles. Waste cycle is keen to help you decrease waste and seperate different waste materials through the use of many skips, bins or containers. Their service is designed to reduce your total waste costs by offering a recycling option where it is economically and environmentally beneficial. You will be provided with the best service, which may lead disposal at other licensed waste recycling centres within close distance of your site.UK Recycling is the nationwide division of Waste cycle. As the leading Waste management company in the Midlands, Waste cycle understands the difficulties of segregation on site, aggravated by the management of sub-contractors and the need to meet tight deadlines. ...read more.

I think that plastics are a great benefit to us as they can be useful for multiple reasons, especially plastic bags. This is because they can be reused again and again and are therefore very durable. This is proven in my research from my results table of my practical work. Glossary Hydrocarbons - An organic compound containing just hydrogen and carbon Fractional Distillation - An industrial process used to separate the constituent parts of crude oil Fraction - A constituent part of crude oil, produced by fractional distillation Alkane - A hydrocarbon in which all the bonds between the carbon atoms are single Alkene - A hydrocarbon in which two or more carbon atoms are joined by double bonds Cracking - A type of chemical reaction in which large alkane molecules are decomposed to form smaller alkanes and alkenes Monomers - A small molecule, for example an alkene that can be joined to many other small molecules to form a large molecule Polymerisation - A chemical process that combines several monomers to form a polymer Thermosetting - A polymer which cannot be melted or remoulded again once formed Thermoplastic - A polymer which softens or melts when heated up and becomes hard again when cooled Biodegradable - Capable of decaying through the action of living organisms Non-Renewable - Cannot be replaced of reused after use Non-Degradable - Incapable of degradation or decomposition Recycle - To treat or process waste materials so as to make them suitable for reuse Plasticiser - A substance added to polymers to make them softer and more flexible. Plasticisers allow polymer chains to slide over each other more easily Bibliography Cracking - Page 108/109 Edexcel GCSE Additional 360 Science textbook Fractional Distillation - Page 168/169 Edexcel GCSE 360 Science textbook Polymerisation - Page 110/111 Edexcel GCSE Additional 360 Science textbook Thermosetting and thermoplastics - Page 110/111 Edexcel GCSE Additional 360 Science textbook Uses of plastics - http://www.wasteonline.org.uk/resources/InformationSheets/Plastics.htm Varieties of plastics - http://earth911.com/blog/2007/08/17/green-forum-plastic-recycling/ Metal to plastic conversion - http://www.plastics1.com/CIM/MetalToPlastic.php Benefits of plastics - http://www.wasteonline.org.uk/resources/InformationSheets/Plastics.htm Development of bio-plastics - http://www.wasteonline.org.uk/resources/InformationSheets/Plastics. ...read more.