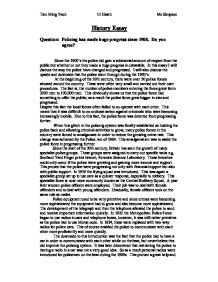 Policing has made huge progress since 1900. Do you agree?

Question:  Policing has made huge progress since 1900.  Do you

Since the 1900’s the police did gain a substantial amount of respect from the public but whether or not they made a huge progress is debatable.  In this essay I will discuss the way the police have changed and progressed.  I will also discuss the upside and downside that the police went through during the 1900’s.

At the beginning of the 20th century, there were over 20 police forces situated around the country.  These were often very small and carried out their own procedures.  The fact is, the number of police members entering the force grew form 3200 men to 100,000 men.  This obviously shows us that the police force had something to offer the public; as a result the police force grew bigger in size and progressed.

Despite this fact the local forces often failed to co-operate with each other.  This meant that it was difficult to co-ordinate action against criminals who were becoming increasingly mobile.  Due to this fact, the police force was deterred from progressing further.

The downside to this introduction was the fact that the police had to have a car in order to communicate with each other while on the beat, but nevertheless this did improve the policing system.  It was later discovered that restricting the police to having a radio in a car was not a very good idea.  So as a result personal radios were introduced for policemen on the beat during the 1960s.  This proved a great help and enabled the police to perform arrests more efficiently.  However, before this, police spent most of their time patrolling their beat alone and on foot.  The only way they could call for assistance was to blow their whistles.  The personal radios progressed even further and in 1997 police were given mobile phones to communicate with each other, although some officers still used radios but this was for immediate communication.

Also introduced during the 1960s were the police cars.  It seemed logical to provide policemen with cars since they had to rush to a crime scene.  The increase in the use of cars meant a decrease in the number of policemen “on the beat”.

Whether or not the police have made a huge progress I would both agree and disagree with this.  I believe that the policing system has made a tremendous progression but is pulled back by the major internal problems that affect it: racism and corruption to name but a few.  To say that the police have made a huge progression would be wrong; it would be more logical to say that they have made a steady progression keeping one head above of crime.  Technology, recruitment, Special Units and Equipment has all progressed but Racism, corruption, brutality and abuse of power is still present to this very day.  It cannot be disputed that the policing system has improved and progressed but the internal problems must be eradicated in order to take the system to a higher level.