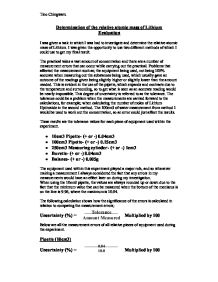 Determination of the relative atomic mass of Lithium Evaluation I was given a task in which I was had to investigate and determine the relative atomic mass of Lithium. I was given the opportunity to use two different methods of which I could use to get my final result. The practical takes a vast amount of concentration and there are a number of measurement errors that can occur while carrying out the practical. Problems that affected the measurement such as; the equipment being used, not being 100% accurate when measuring out the substances being used, which usually gave an outcome of the readings given being slightly higher or slightly lower than the amount needed. This is evident in the use of the pipette, which expands and contracts due to the temperature and surrounding, so to get what is seen as an accurate reading would be nearly impossible. This degree of uncertainty is referred to as the tolerance. The tolerance could be a problem when the measurements are carried forward to the calculations, for example; when calculating the number of moles of Lithium Hydroxide in the second method. ...read more.

To prevent this from happening I could have used an inert solvent to wash all the oil off the Lithium providing me with all the correct results. After carrying out and completing my experiment, and going through two methods in which to get the result of my task, I can see why it is essential to have more than one method, as one method will not show the mistakes and effectiveness another method will. I feel that the most effective method was method 2. This is because it was most effective in finding the relative atomic mass of lithium. I feel this is because the most inaccurate piece of equipment, which is the balance, was not included in this method which would have gave a better chance of getting accurate results. Another reason is that within this method the Burette was used which had the most accurate functions to get the most reliable results, which put this method at a steady advantage as the least accurate apparatus was excluded and the most accurate was included. ?? ?? ?? ?? Tino Chingwaru ...read more.