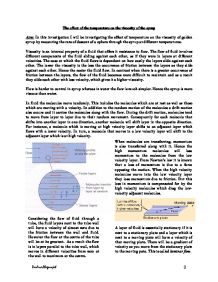 The effect of the temperature on the viscosity of the syrup.

The effect of the temperature on the viscosity of the syrup

Aim: In this investigation I will be investigating the effect of temperature on the viscosity of golden syrup by measuring the rate of descent of a sphere through the syrup at different temperatures.

Viscosity is an internal property of a fluid that offers it resistance to flow. The flow of fluid involves different components of the fluid sliding against each other, as if they were in layers at different velocities. The ease at which the fluid flows is dependant on how easily the layers slide against each other. The lower the viscosity is the less the occurrence of friction between the layers as they slide against each other. Hence the easier the fluid flow. In contrast when there is a greater occurrence of friction between the layers, the flow of the fluid becomes more difficult to maintain and as a result they slide each other with less velocity, which gives it a higher viscosity.

Flow is harder to control in syrup whereas in water the flow is much simpler. Hence the syrup is more viscous than water.

In fluid the molecules move randomly. This includes the molecules which are at rest as well as those which are moving with a velocity. In addition to the random motion of the molecules a drift motion also occurs and it carries the molecules along with the flow. During the drift motion, molecules tend to move from layer to layer due to their random movement. Consequently for each molecule that shifts into another layer in one direction, another molecule will shift layer in the opposite direction. For instance, a molecule which is moving at high velocity layer shifts to an adjacent layer which flows with a lower velocity.

At high temperature the viscosity of the syrup will be low. This is because the molecules gain energy at high temperature, which reduces the syrup’s resistance to flow, since the friction between the layers is also reduced. This is due to a gain in energy. As a result the molecules move at a higher velocity and drift motion occurs highly. This change increases the rate of flow, decreasing the viscosity of the syrup.

Lowering the temperature of the fluid increases the viscosity of the syrup. The molecules lose energy at lower temperature which in effect increases the syrup’s resistance to flow. This is due to the increased friction between the layers caused by the gain in energy. Consequently the molecules move with a low velocity, as the chances of a drift motion occurring also decreases. This change lowers the rate of flow of the syrup.

0. This suggests the real value of viscosity at 50 will be higher than the result that I have obtained. As the temperature was increasing from 50 to 80 the velocity at which the sphere must have also increased which provides a smaller value of viscosity than the actual.   I say this because when the temperature increases the syrup flows with ease, which causes the sphere to travel with a higher velocity. To eliminate this error a water bath can be used.

A water bath would maintain a constant temperature as the sphere travels from the beginning till the end, equilibrating the total temperature of the syrup. The measuring cylinder must be contained in a transparent beaker, to allow me to observe the descent of the sphere.

This book enabled me to understand the definition of viscosity and had widened my knowledge of viscosity by explaining how the properties of fluid link to the viscous of a fluid and how they function.

I have found this book extremely useful since it has provided me the difference between laminar flow, turbulent flow and stream line.

This book has instructed me the forces that occurs when a sphere descend through the syrup.

From this web site I have found why the viscosity changes due to the change in the temperature, which helped me to provide the scientific evidence in my background knowledge as well as it has been very useful in my hypothesis.

This web page has introduced the Stokes law which was the relevant formula to calculate the viscosity of the fluid. Therefore I have found this web page very useful and helpful.

This web site has also helped me to understand the laminar flow theory in depth.