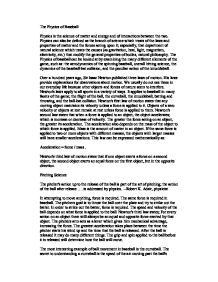 The Physics of Baseball.

The Physics of Baseball

Physics is the science of matter and energy and of interactions between the two. Physics can also be defined as the branch of science which treats of the laws and properties of matter and the forces acting upon it; especially, that department of natural science which treats the causes (as gravitation, heat, light, magnetism, electricity, etc.) that modify the general properties of bodies, natural philosophy. The Physics of baseball can be looked at by examining the many different elements of the game, such as: the aerodynamics of the spinning baseball, overall hitting science, the dynamics of the baseball-bat collision, and the peculiar action of the knuckleball.

Over a hundred years ago, Sir Isaac Newton published three laws of motion. His laws provide explanations for observations about motion. We usually do not see these in our everyday life because other objects and forces of nature seem to interfere. Newton's laws apply to all sports in a variety of ways. It applies to baseball in many facets of the game; the flight of the ball, the curveball, the knuckleball, batting and throwing, and the ball-bat collision. Newton's first law of motion states that any moving object maintains its velocity unless a force is applied to it. Objects of a zero velocity or objects at rest remain at rest unless force is applied to them.

The most important pitch in baseball is the fastball. There are many different variations of the fastball (four-seam and split-finger fastball). The four-seam fastball or the rising fastball is thrown straight and hard with a lot of backspin. Your index and middle finger are positioned across two seams, so when thrown four seams rotate in the backspin. A good rising fastball thrown hard enough with enough backspin can rise four inches from the lowest point of trajectory to the catcher's mitt. On the other hand, the splitfinger is thrown with the fingers split apart, like a V, and directed along the seams of the ball. With this grip, the airflow sees only two seams, so the average surface is much smoother, and a greater air resistance is felt, resulting in a slightly slower pitch. The effect of splitting the fingers is to allow the ball to "slip" out between them and approach home plate with less backspin. This eliminates the "hop" of the rising fastball, allowing the ball to drop as much as 16 inches, and is the essence of the splitter.

One important difference between a fastball, a curveball, a slider, and a screwball is the direction in which the ball spins. (Other important factors are the speed of the pitch and rate of spin.) Generally, a ball thrown with a spin will curve in the same direction that the front of the ball (home plate side, when pitched) turns.

As you and I have found out, a great deal of information can be understood on the basis of the physics' principals. After looking at the physics for pitching and hitting, I understand how and why things happen in the game of baseball. I have found new and interesting facts that will be useful to me, as a pitcher, in my upcoming baseball season. At the bottom of this paragraph I have listed more attention-grabbing facts that I found fascinating.

*To hit a ball for maximum distance, the trajectory off the bat should have a 35-degree angle.

*A 400-foot home run will go about 6 feet farther for every inch reduction on the barometer.

*The collision of a ball on the bat lasts only about 1/100th of a second.

*A batted ball should be able to travel no farther than 545 feet (excluding meteorologically freaky conditions).

*There is no such thing (except in softball) as a rising fastball!