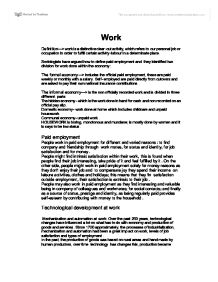 Work Definition---> work is a distinctive clear-cut activity, which refers to our personal job or occupation in order to fulfill certain activity/labour in a determinate place. Sociologists have argued how to define paid employment and they identified two division for work done within the economy: The formal economy---> includes the official paid employment, these are paid weekly or monthly with a salary. Self- employed are paid directly from cutovers and are asked to pay their own national insurance contributions. The informal economy---> is the non officially recorded work and is divided in three different. parts: The hidden economy- which is the work done in hand for cash and non recorded on an official pay slip. Domestic economy- work done at home which includes childcare and unpaid housework Communal economy- unpaid work . HOUSEWORK is boring, monotonous and mundane; is mostly done by women and it is says to be low status. Paid employment People work in paid employment for different and varied reasons: to find company and friendship through work mates, for status and identity, for job satisfaction and for money. People might find intrinsic satisfaction within their work, this is found when people find their job interesting, take pride of it and feel fulfilled by it. ...read more.

Disadvantages -It replaces workers, leading to unemployment, replaces both skill mental labour and unskilled manual labour. - Little job satisfaction - Cause deskilling because necessary skills required in many jobs became less complex. - Mundane repetitive tasks. - Less pride and interest in the job - Traditional skills were lost. Alienation at work Many people may gain little job satisfaction from their work, Karl Max argued that industrial workers might be alienated from their work emphasizing on the powerless, meaningless, isolation and lack of fulfillment experienced by employees at work. Features of Alienation---> - Lack of power: no power/control over the work process. - Lack of meaning: they feel their work has no meaning or purpose. -Isolation: they may feel cutoff from communication with others. - Lack of fulfillment: they might feel they are not using their abilities and not achieving their potential which leads to little job satisfaction. Unemployment How to measure unemployment There are some issues and disagreement to measure unemployment; there are two main ways: the official UK measurement and the International Labour Organization measurement. These two ways of measurement will give different figures - this is why unemployment is difficult to assess, because it depends on how we measure it and who do we include or exclude-. ...read more.

-Economic recessions = many people who have lost their jobs during the 70s and 80s never found paid employment again. Unemployment affecting individuals Individuals may be affected by poverty, the loss of status, income, status (lack of it), boredom, familiar tensions and problems, loss of friends, loss of identity and aspirations. The loss of these features are manifested in the standers of living and how their lifestyle may be affected. Unemployment affects different groups in different ways. These groups are: Young people, who may be forced to continue living with their parents leading to family tension,conlict and stress and social and personal difficulties. Depression arises, feelings of worthless, listlessness, social isolation and bitterness are manifested as they find person of the aspect of becoming an adult. Black people might also be affected by the arise of racism, prejudice, discrimination and poor housing; women are also affected suffering from income loss, decline in status, social isolation, lack of confidence and decrease of leisure extracurricular activities while men suffer from loss of confidence and self-esteem and might feel threaten by their gender s identity and status. Unemployment affecting society -Unemployment affects society as it is a big economic costs, as public money is spent on social security benefits instead of investing it coherently. - High rates of unemployment means greaer inequality meaning increasing poverty. - high rates of unemployment weaken the trade unions. - scapegoating and racism. ...read more.