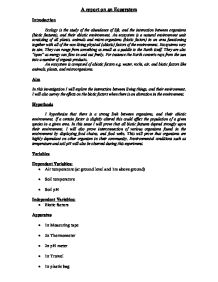 A report on an Ecosystem

A report on an Ecosystem Introduction Ecology is the study of the abundance of life, and the interaction between organisms (biotic features), and their abiotic environment. An ecosystem is a natural environment unit consisting of all plants, animals and micro-organisms (biotic factors) in an area functioning together with all of the non-living physical (abiotic) factors of the environment. Ecosystems vary in size. They can range from something as small as a puddle to the Earth itself. They are also "open" as energy can flow in and out freely. For instance the Earth converts rays from the sun into a number of organic products. An ecosystem is composed of abiotic factors e.g. water, rocks, air, and biotic factors like animals, plants, and microorganisms. Aim In this investigation I will explore the interaction between living things, and their environment. I will also survey the effects on the biotic factors when there is an alteration in the environment. Hypothesis I hypothesise that there is a strong link between organisms, and their abiotic environment. If a certain factor is slightly altered this could affect the population of a given species in a given area. ...read more.

Measure a piece of land 10m x 10m in area using measuring tape, Make sure 10m transect line runs through a selected area where features such as undulation of land and vegetation varies. 2. Using a thermometer measure the air temperature by holding a thermometer 1m above ground level 3. Measure the temperature of the soil by placing a different thermometer in the soil. Dig the instrument into the ground so that it does not fall. 4. Following this collect a soil sample by digging into the soil using a trowel 5. Carefully place the soil in a plastic bag. Tie up the plastic bag so that the soil sample is secure. 6. Walk the length of the transect line, observing the plants and animals along the way. Make a list of all plants and animals species observed. 7. Choose a specific plant species (grass), Form 0.5m x 0.5m quadrangle using measuring tape, and count number of chosen species within this quadrat. 8. Repeat step seven 5 times using different quadrats of the same area in order to justify results. ...read more.