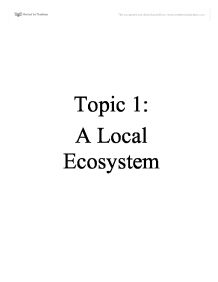 A Local Ecosystem, Patterns in Nature,Life on Earth,The Australian Biota

Topic 1: A Local Ecosystem * Compare the abiotic characteristics of aquatic and terrestrial ecosystems Organisms that live in aquatic and terrestrial have a very different apperence (morphology) and way of functioning (physiology). Terrestrial animals have support for living out of water and for transport on land. Abiotic characteristic Aquatic environment Terrestrial environment Temperature is related to latitude and altitude Less variation. Cooler with depth. Smaller bodies of water warm faster than larger ones Great variation during the day, throughout the year and with altitude and location Pressure Pressure increases greatly with depth Atmospheric pressure decreases with altitude Water Rapidly available Varies and can be a major issue for organisms Dissolved ions (Na+, Cl-) Readily available, may lead to osmotic pressure May be plentiful or sparse depending on the soil Gasses that are important for photosynthesis and respiration Less available in water Plentiful. Decreases with altitude Wind, tides and currents Changes in tides and currents can decrease survival Wind can reduce the amount of water available by increasing evaporation Buoyancy is the uplift from the medium High in water Low in air Light is important for photosynthesis Availability changes with depth Usually readily available Viscosity High in water Low in air * Identify the factors determining the distribution and abundance of a species in each environment A population will continue to grow in abundance until it is restricted by a limiting factor. A limiting factor is a rescource that is in short supply and so restricts the growth of a population. Limiting factors include: lack of space, preditors, disease, competition for food between members of the same or other species, physical factors eg whether conditions, availability of water and light etc. The distribution of plants in a marine environment is limited to the area where light penetrates for photosynthesis to occur. * Describe the roles of photosynthesis and respiration in ecosystems Producers capture light through the process of photosynthesis and is used to combine carbon dioxide with water, making oxygen and forming carbohydrates such as glucose. ...read more.

These conditions are likely to have existed on other planets and moons. This suggests that organic molecules, and perhaps life forms originating from them, may occur in other parts of our universe. Ironically, the conditions on present-day Earth, called oxidising conditions, no longer support the spontaneous formation of organic molecules on early Earth was an essential precursor for the origin of life on Earth. * describe two scientific theories relating to the evolution of the chemicals of life and discuss their significance in understanding the origin of life and * discuss the significance of the Urey and Miller experiments in the debate on the composition of the primitive atmosphere Theory 1: The chemicals for life came from outer space- a cosmic origin (Panspermia). Scientists believe that the earth was heavily bombarded with meteorites during the early years of its formation. When certain types of meteorites called carbonaceous chondrites were first analysed in the 1970's they were found to contain organic molecules, including amino acids. This provides evidence of the existence of organic molecules elsewhere in the cosmos. It is possible that meteorites falling on the early Earth could have contributed some of the organic molecules required by living systems. Theory 2: The chemicals of life were formed on Earth Urey and Miller's experiment was the experiment performed to support this theory. Urey and Miller hypothesised that simple organic molecules could spontaneously form under conditions thought to exist on early Earth. They set up a chamber simulating the early atmosphere. After a week they tested samples from the experiment and reported finding amino acids. The importance of Urey and Miller's experiments was that they designed experiments to test the existing hypothesis of Haldane and Oparin of the origin of organic molecules of Earth. The research of Urey and Miller led to other scientists to investigate in this area, pushing forward knowledge about the beginning of life. ...read more.

* explain the importance of the study of past environments in predicting the impact of human activity in present environments Study of the past shows that there have been five or six mass extinctions. Now we are facing the possibility of another mass extinction, caused by humans. The geological time scale uses these mass extinctions to mark the end of each period of geological time. The knowledge that there have been catastrophic events in the past that have nearly wiped out all life is a wake-up call to humans. With this knowledge of the past and applying it to present and future environments, scientist can devise methods of protection and conservation. * identify the ways in which palaeontology assists understanding of the factors that may determine distribution of flora and fauna in present and future environments Palaeontologists supply information from the fossil record of the distribution of fauna in the past. This assists us to understand the factors that may determine the distribution of flora and fauna in present and future environments. This information includes the knowledge of climate change. Evidence shows that as Australia drifted northwards, the climate dried out effecting flora and fauna. Similarly humans have affected the climate with the destruction of the ozone layer and this had altered flora and fauna. This information can be used to reduce the impact of habitat destruction of species. * explain the need to maintain biodiversity Biodiversity is the variety and number of living forms that exist in an area. It is also the genetic diversity of species as well as the diversity of species as well as the diversity of their ecosystems. Biodiversity is essential for maintaining the functions of natural systems on Earth, such as providing clean water, air, productive soil and recycling matter. Many human activities depend on biodiversity, for example, agriculture, forestry, fisheries and tourism, construction, textile manufacturing and medicine. Today there is an international concern that the rate of loss of biodiversity on the planet is increasing, the main cause being human interaction. ...read more.