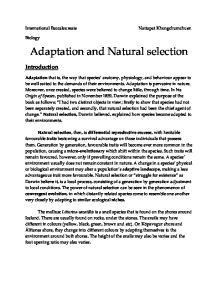 International Baccalaureate Nattapat Khongchumchuen Biology Adaptation and Natural selection Introduction Adaptation that is, the way that species' anatomy, physiology, and behaviour appear to be well suited to the demands of their environments. Adaptation is pervasive in nature. Moreover, once created, species were believed to change little, through time. In his Origin of Species, published in November 1859, Darwin explained the purpose of the book as follows: "I had two distinct objects in view; firstly to show that species had not been separately created, and secondly, that natural selection had been the chief agent of change." Natural selection, Darwin believed, explained how species became adapted to their environments. Natural selection, then, is differential reproductive success, with heritable favourable traits bestowing a survival advantage on those individuals that possess them. Generation by generation, favourable traits will become ever more common in the population, causing a micro-evolutionary which shift within the species. Such traits will remain favoured, however, only if prevailing conditions remain the same. A species' environment usually does not remain constant in nature. A change in a species' physical or biological environment may alter a population's adaptive landscape, making a less advantageous trait more favourable. ...read more.

Also, the local area differences of the snails may affect the snails' colours. The low frequency of bright colours on the snail's shell in K�pavogur is likely to be due to the relative absorption of solar energy of snails' shell because they mostly live under seaweed and in �lftanes, the snail's shell will be darker in colour due to sunlight absorption. The snails in �lftanes shore do not live under seaweed, so sunlight absorption will be less, this due to the environmental selection in area effects. Design: Controlled variable: two identical plastic cups, random sampling using same method and 17 Snails on each shore Independent variable: K�pavogur shore and �lftanes shore Dependent variable: Colours of snails Data collection: Materials 1) Two plastic cups 2) One pair of latex gloves Method 1) Name two cups which will be used to collect the snails on K�pavogur and �lftanes shores. 2) Pick the snails randomly around the area (use latex gloves) with approximately 10 steps forward from the shore (starting point), 5 steps on the right and finally 5 steps on the left. 3) Redo 2) one more time 4) Collect approximately 17 snails 5) Kill the snails by pouring ethanol into both cups and let the snails die, wait for the next day 6) ...read more.

Also, when snails live on the shore, environment affects their living condition such as those snails that live under seaweed would not absorb sunlight properly, so they have darker colour that the one that absorb sunlight properly. My hypothesis proves to be true due to environmental effect and sexual reproduction. We could measure the sizes of the snails and do the T-test if we measure the size of the snails, in this case we could not be able to do that. As the colours are investigated T-test cannot be carried out. Colours have limited on the quality of the data because it cannot be measure probably, instead of measuring the sizes we calculate percentage of the snails on each shores. In design the dependent variable should be the sizes because we could observe the differences in natural selection though sizes rather than colour. When colours are investigated it has lack accuracy to observe the changes in natural selection and adaptation. To improve the investigation we have to clean the snails more than two times to see whether the colours have changed or not. Do not use ethanol to kill them because it could affect on the colours of the snails� shell and it may become white because the use of the chemical. ...read more.