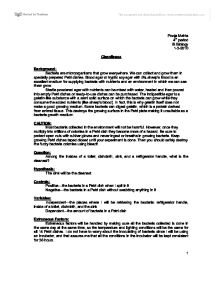 Bacteria and Cleanliness. Question: Among the insides of a toilet, dishcloth, sink, and a refrigerator handle, what is the cleanest?

Pooja Mehta 4th period IB Biology 1-3-2010 Cleanliness Background: Bacteria are microorganisms that grow everywhere. We can collect and grow them in specially prepared Petri dishes. Blood agar or tryptic soy agar with 5% sheep's blood is an excellent medium for supplying bacteria with nutrients and an environment in which we can see them grow. Sterile powdered agar with nutrients can be mixed with water, heated and then poured into empty Petri dishes or ready-to-use dishes can be purchased. The indigestible agar is a gelatin-like substance with a semi solid surface on which the bacteria can grow while they consume the added nutrients (like sheep's blood). In fact, this is why gelatin itself does not make a good growing medium. Some bacteria can digest gelatin, which is a protein derived from animal tissue. This destroys the growing surface in the Petri plate making it unsuitable as a bacteria growth medium. CAUTION: Most bacteria collected in the environment will not be harmful. However, once they multiply into millions of colonies in a Petri dish they become more of a hazard. Be sure to protect open cuts with rubber gloves and never ingest or breathe in growing bacteria. Keep growing Petri dishes taped closed until your experiment is done. Then you should safely destroy the fuzzy bacteria colonies using bleach. Question: Among the insides of a toilet, dishcloth, sink, and a refrigerator handle, what is the cleanest? ...read more.

Procedural errors were kept to a minimum, and the equipment in addition to the time management were suitable for this experiment. The time to collect all the bacteria took seven minutes, and the choice of equipment, as stated above, avoided any possible errors with judgment. Furthermore, the chosen process was the most appropriate for this experiment and thusly eliminated any possible errors involved with the procedures. Though this experiment yielded results that are credible and are of good quality, there are multiple methods that I could have taken to improve this experiment. A weakness in this experiment that multiple trials were not conducted. Although I did have three different Petri dishes for each of the four independent variables, I simply tested the four variables out of one common household. To have a better comprehension of the data, I should have ventured out to test other households. This weakness is very significant, and could have dramatically altered the results, possibly inviting a couple of outliers, and a change in the order of cleanest to the dirtiest. Another weakness in this experiment, also highly significant as the last one, was the fact that I only tested four areas that were concentrated in either the kitchen or the bathroom. To retrieve a better representation of a common living area and to overall improve the experiment, I should have extended the experiment to other areas such as the living room, study room, garage, the attic, and the master bedroom. Spreading out the areas I would have tested could have too altered the results severely. ?? ?? ?? ?? 1 ...read more.