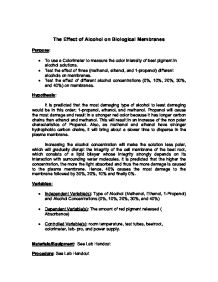 The Effect of Alcohol on Biological Membranes Purpose: * To use a Colorimeter to measure the color intensity of beet pigment in alcohol solutions. * Test the effect of three (methanol, ethanol, and 1-propanol) different alcohols on membranes. * Test the effect of different alcohol concentrations (0%, 10%, 20%, 30%, and 40%) on membranes. Hypothesis: It is predicted that the most damaging type of alcohol to least damaging would be in this order; 1-propanol, ethanol, and methanol. Propanol will cause the most damage and result in a stronger red color because it has longer carbon chains than ethanol and methanol. This will result in an increase of the non polar characteristics of Propanol. Also, as methanol and ethanol have stronger hydrophobic carbon chains, it will bring about a slower time to disperse in the plasma membrane. Increasing the alcohol concentration will make the solution less polar, which will gradually disrupt the integrity of the cell membrane of the beet root, which consists of a lipid bilayer whose integrity strongly depends on its interaction with surrounding water molecules. ...read more.

Overall, I think that the lab was proficient and no more further improvements would be needed. QUESTIONS 1.) Ethanol damaged membranes more at low concentrations. At 10 % alcohol, there was more propanol pigment released into the solution compared to the 1- propanol and methanol. 2.) 1-Propanol seems to affect membranes the most, as there is more pigment (cellular damage) at any concentration of alcohol. 3.) For all three alcohols, the percentage of alcohol that was the most damaging was 40%. CHALLENGE QUESTION It is said that the larger the size of an alcohol molecule, the greater the extent of membrane damage. 1-Propanol, a three carbon molecule, is larger than ethanol, a two carbon molecule and methanol, a one carbon molecule. Lipids can be made of hydrocarbon chains, which are non-polar. As the alcohol increases its length, it becomes less polar than smaller alcohols. Then it is allowed to combine with lipids to a greater extent. Since the OH branch of the alcohol mixes with water, the longer alcohols can mix with both lipids and water. This tends to dislocate the cellular membrane. For this reason, larger alcohols might cause wide-ranging membrane damage. Sources: http://en.wikipedia.org/wiki/Ethanol http://en.wikipedia.org/wiki/Methanol http://en.wikipedia.org/wiki/Propan-1-ol http://iq.lycos.co.uk/qa/show/1407/What+effect+does+alcohol+have+on+the+membrane+of+a+beetroot+cell/ ...read more.