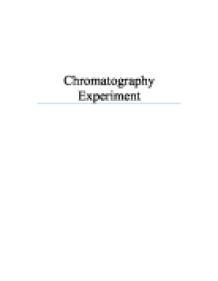 Chromatography Experiment Title: separation of pigments of photosynthesis using paper chromatography. Goal (main aim): Calculating the Rf of every single pigment, in order to distinguish it and identify its solubility. Hypothesis: In photosynthesis; two types of pigments are involved; chlorophyll (A or B) and carotenoids, by using paper chromatography we can distinguish each pigment, by measuring the color's Rf; referring to the next formula: Variables: Independent variable: - Pigment solubility. Dependent variable: - The distance that the pigments move, on the chromatography paper. Controlled variables: VARIABLE WAY OF CONTROL Temperature The experiment will be carried out in room temperature. Solvent volume In order to minimize uncertainty; the solvent will be added using a pipette. Volume & concentration of extraction The extraction sample will be taken using the same tweezers. Materials and procedure: Materials: 1- Chromatography Jar. 2- Plant. 3- Chromatography paper. 4- Solvent (organic). ...read more.

- Insert the chromatography paper (containing the pigments of the extraction), in the chromatography jar until the triangular end is totally emerged by the solvent. (Keep in mind not to let the extraction pigments touch the solvent). - Close the jar firmly, to prevent solvent evaporation. - Wait, until the pigments start dissolving, as a result of the solvent elevating on the paper. - When the solvent is 1 cm away from your paper's top, take the papers out and mark the farthest point of the solvent's elevation (solvent front). (Make sure you mark quickly before the line evaporates). - Repeat the previous steps for more results. - Calculate Rf using the following formula: - Put your results in the form of a table. - Compare results with the standard Rf table.(This helps to determine the type of pigment obtained). ...read more.

(0.50�0.05) and (X2)(0.70�0.05), can be considered close to the standard (Rf) (0.45) and (0.65) respectively, which shows that the method used to calculate (Rf ) in the hypothesis is valid. Evaluation: * In table (1), a clear difference can be seen between the reults of the 1st and 2nd trials, and also between the average (Rf) of (X3) and the standard (Rf), which shows the occurrence of errors, those errors could be: - To cut a triangular end, a pair of scissors was used; using a pair of scissors doesn't always guarantee the formation of an isosceles triangle, which affected the elevation (diffusion), of the solvent up the paper. - Since tweezers were used to add the extraction samples, it had a huge possibility of uncertainty when it comes to the equality of the volume taken for the two trials. - A ruler was used to measure the distance moved by each pigment, and this contains a pretty much big amount of uncertainty involved. ...read more.