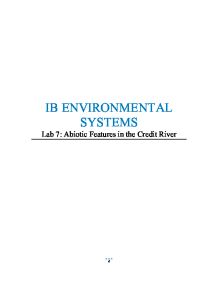 IB ENVIRONMENTAL SYSTEMS Lab 7: Abiotic Features in the Credit River Planning A Introduction The Credit River is an open freshwater system that flows through a predominantly agricultural sector of southern Ontario. The river is approximately 1,500km long and drains into Lake Ontario at Port Credit. Due to urbanization, lower sections of the river have experienced reduced water quality but still remains to attract a variety of species. Research Question What are the physical and biological components that influence biotic life with regard to abundance and Diversity in the freshwater habitat of the Credit River?i Hypothesis Relationships between abiotic components will be investigated in this fresh water ecosystem. The main abiotic characteristics in the Credit River that will be explored include; oxygen reduction potential, depth and temperature. Furthermore, abiotic limiting factors such as seasonal differences will be evaluated and discussed. As a result, I hypothesize that quadrants with high oxygen reduction potentials will be colder. Another abiotic factor that will influence the temperature of the Credit River is the average depth. ...read more.

By including this point, the relationship between velocity and temperature as well as depth would be harder to understand. Reasons for the statistical anomaly can only be speculated as human error (data collection mistake) in this situation since the depth was listed as 32cm and velocity as 0m/s while all other data had a velocity greater than 0. Therefore, the exclusion of this velocity measurement enables a more accurate interpretation of the velocity data in respect to its comparisons to other values of temperature and depth. On a wider spectrum of analysis, the temperature readings were taken with an analog thermometer, therefore a person's interpretation of the visual reading may vary depending on the perception of the visual data, which may vary from the true value by up to �.5 degrees Celsius. The uncertainty and possible error in the velocity measurements is that the method used to collect data involved sending a foam ball from one point upstream one meter downstream, this lead to human errors in timing of recording the data, and natural error of there not being a straight course of travel for ...read more.

Also, the temperature was negatively related to the increase in water depth, proving that according to the hypothesis, the cooler water will be situated at the bottom, and the top-water has an increased temperature, due to increased exposure to solar radiation resulting in conduction of radiation to the water. To confirm the results further, the result of comparing water velocity to temperature reflected confirmed that its correlation is positive; this can be explained through examining the relation between water depth and velocity comparison in which as the depth decreases, the velocity of the water increases. The nature of the depth, temperature and velocity is that as depth decreases, a higher volume of water flows in a compressed space, therefore making the surface flow faster, and since a more shallow depth occurs when velocity is high, the average temperature for a quadrat will be greater. Therefore, all the abiotic factors can be linked cohesively; being intertwined within the effects of another, minus the oxygen reduction potential, which defied the hypothesis, and cannot be fully judged accordingly. i The research question and introduction are the same in lab #7 and lab #8 ?? ?? ?? ?? ...read more.