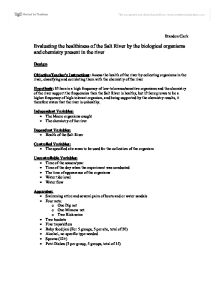 Brandon Clark Evaluating the healthiness of the Salt River by the biological organisms and chemistry present in the river Design Objective/Teacher's Instructions: Assess the health of the river by collecting organisms in the river, classifying and correlating them with the chemistry of the river Hypothesis: If there is a high frequency of low-tolerance/sensitive organisms and the chemistry of the river support the frequencies then the Salt River is healthy, but if there proves to be a higher frequency of high-tolerant organism, and being supported by the chemistry results, it therefore states that the river is unhealthy. Independent Variables: * The Macro organisms caught * The chemistry of the river Dependant Variables: * Health of the Salt River Controlled Variables: * The specified site areas to be used for the collection of the organism Uncontrollable Variables: * Time of the season/year * Time of the day when the experiment was conducted * The time of appearance of the organisms * Water tide level * Water flow Apparatus: * Swimming attire and several pairs of boots and or water sandals * Four nets: o One Dip net o One Minnow net o Two Kick seine * Two buckets * Five trays/sifters * Baby food jars (For 5 groups, 5 per site, total of 20) * Alcohol, no specific type needed * Spoons (12+) * Petri Dishes (3 per group, 5 groups, total of 15) ...read more.

An assumption would be the release of the water from the local Roosevelt Dam that controlled the water levels. Excluded from the overall results, site five had failed to report any findings and thus the health of that site was not calculated into the overall conclusion. Improving the investigation The improvements that could be made for the overall experiment would to conduct not just once, but multiple times from the warm season of summer to the cold, and to have a longer allotted time to collect the macroinvertabrates within the river, as well as different hours of the day such as night and early morning. Also, with going multiple times during the year, with the water level changing occasionally but with the chance of having the experiment conducted with high water levels, collecting the different bugs over a long span of time can tell if the rivers health id dependant on seasonal changes within the environment, one such possibility being the lower health in summer due to the pollution caused by the human population that goes to the river recreationally. Besides that, more nets could be used so that there is no waiting in switching the equipment from site to site after each trial and any other helpful catching methods besides the most useful ways of capturing using the kick seine and the bucket. ...read more.