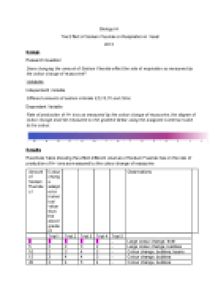 Investigating the Effect of Sodium Fluoride on Respiration in Yeast

This indicates that sodium fluoride is an inhibitor of respiration, the scientific theory behind by results is explained below. During respiration glucose is oxidised and hydrogen released at various stages, controlled by a dehydrogenase enzyme. In our experiment we used yeast, a microscopic, unicellular organism as a respiratory substrate as it contains stored food. To measure the rate of respiration we used resazurine as changes colour when it is reduced (gains H2), which occurs during respiration. The lighter the final colour the larger the amount of respiration, or according to our colour gradient the small number equates to a higher rate of respiration. In the yeast an enzyme enolase catalyzes the conversion of phosphoglycerate into phosphoenol pyruvate. Yet this conversion can be inhibited by the introduction of sodium fluoride as it is an inhibitor of the enzyme "enolase" an enzyme necessary for glycolysis(2). Therefore as we increased the volume of sodium fluoride added to the yeast less colour change will occur as the sodium fluoride is precenting glycolysis and the subsequent production of H2 ions which react with the resazurine causing it to change colour. ...read more.

Because the reaction is effected by light there would have differing light levels between trials causing there to be different respiration rates effecting the validity and reliability of our results. Conduct the experiment in pitch black with one lamp 30cm away for the test tube and have an automated device which measures the amount of light let through the test tube. Temperature of the water bath was difficult to maintain. As respiration is enzyme controlled and enzymes are effected by temperature it is important to keep the temperature consistent. Otherwise decreases in temperature will cause the enzymes kinetic energy to decrease and less collisions will be made and the rate of respiration will decrease. Which will significantly decrease the validity of our results. We could use an electronic thermostatic water bath. Which would keep the temperature consistent. Low concentration of sodium Fluoride Because we were using a low concentration we were not getting differences between our results. Therefore the conclusion was difficult as out results were clustered together. Use a 0.5 mol/dm3 of sodium fluoride. 1http://www.courseworkbank.info/courseworkbank.info.php?f=R0NFIEEgLSBMZXZlbC9DaGVtaXN0cnkvUmF0ZSBvZiByZXNhenVyaW4gZWNwZXJpbWVudC5wZGY= 2http://www.faculty.fairfield.edu/genbio/lab171/LabManual1_201201.pdf ...read more.