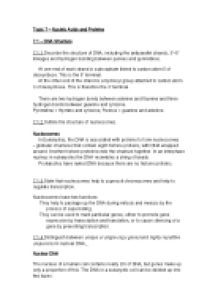 ï»¿Topic 7 – Nucleic Acids and Proteins 7.1 – DNA Structure 7.1.1 Describe the structure of DNA, including the antiparallel strands, 3’–5’ linkages and hydrogen bonding between purines and pyrimidines. ï At one end of each strand is a phosphate linked to carbon atom 5 of deoxyribose. This is the 5’ terminal. ï At the other end of the strand is a hydroxyl group attached to carbon atom 3 of deoxyribose. This is therefore the 3’ terminal. ï There are two hydrogen bonds between adenine and thymine and three hydrogen bonds between guanine and cytosine. Pyrimidine = thymine and cytosine; Purines = guanine and adenine. 7.1.2 Outline the structure of nucleosomes. Nucleosomes ï In Eukaryotes, the DNA is associated with proteins to form nucleosomes – globular structures that contain eight histone proteins, with DNA wrapped around. Another histone protein bonds the structure together. In an interphase nucleus in eukaryotes the DNA resembles a string of beads. ï Prokaryotes have naked DNA because there are no histone proteins. 7.1.3 State that nucleosomes help to supercoil chromosomes and help to regulate transcription. Nucleosomes have two functions: They help to package up the DNA during mitosis and meiosis by the process of supercoiling. They can be used to mark particular genes, either to promote gene expression by transcription and translation, or to cause silencing of a gene by preventing transcription. ...read more.

7.2.2 Explain the process of DNA replication in prokaryotes, including the role of enzymes (helicase, DNA polymerase, RNA primase and DNA ligase), Okazaki fragments and deoxynucleoside triphosphates. Leading strand: DNA replication takes place towards the replication fork. Lagging strand: DNA replication takes place away from the replication fork. 7.2.3 State that DNA replication is initiated at many points in eukaryotic chromosomes. The rate of replication in fruit flies (Drosophila) is 2600 nucleotides/minute. The largest chromosome of Drosophila is 6.5 x 107 nucleotides. If DNA replication started at both ends of the chromosome, it would take 8.5 days to replicate the chromosome. In fact, it only takes 3- 4 minutes. In order to explain this discrepancy, scientists have determined that replication must start at many points along the same DNA helix at the same time. This process is needed in eukaryotic cells because they have very large amounts of DNA, which would take much longer to replicate if replication was done from one end of the chromosomes to the other. 7.3 Transcription 7.3.1 State that transcription is carried out in a 5? ? 3? direction. Transcription is the enzyme-controlled process of synthesizing RNA from a DNA template. It is carried out in a 5? to 3? direction (of the new RNA strand). This means that new RNA nucleotides are added to the 3? end of the growing RNA strand. ...read more.

Termination Initiation mRNA binds to the small sub-unit of the ribosome ribosome slides along mRNA to start codon anticodon of tRNA pair with codon on mRNA complementary base pairing between codon and anti-codon anticodon of tRNA with methionine pairs with start codon/AUG is start codon second tRNA pairs with next codon Elongation Peptide bond forms between amino acids Ribosome moves along the mRNA by one codon Movement in 5? to 3? direction tRNA that has lost its amino acid detaches Another tRNA pairs with the next codon/moves to A site tRNA activating enzymes Link amino acids to specific tRNA 3. Termination 7.4.4 State that translation occurs in a 5? ? 3? direction. During translation, the ribosome moves along the mRNA towards the 3? end. The start codon is nearer to the 5? end. There are 3 stop codons. 7.4.5 Draw and label a diagram showing the structure of a peptide bond between two amino acids. 7.4.6 Explain the process of translation, including ribosomes, polysomes, start codons and stop codons. Codon: three consecutive bases in DNA (or RNA), which specify an amino acid. Anticodon: three consecutive bases in tRNA, complementary to a codon on RNA. 7.4.7 State that free ribosomes synthesize proteins for use primarily within the cell, and that bound ribosomes (in RER) synthesize proteins primarily for secretion or for lysosomes. 7.5 Proteins 7.5.1 Explain the four levels of protein structure, indicating the significance of each level. The bonds in a tertiary structure form between R groups. ...read more.