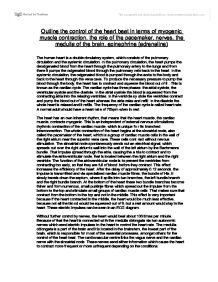 Outline the control of the heart beat in terms of myogenic muscle contraction, the role of the pacemaker, nerves, the medulla of the brain, epinephrine (adrenaline)

The function of the atrioventricular node is to prevent the ventricles from contracting too early, so that they are full of blood before they contract. This effect increases the efficiency of the heart. After the delay of approximately 0.12 seconds, the impulse is transmitted and via specialized cardiac muscle fibres, the bundle of His, it slowly travels down the septum, where it splits into two branches, the left bundle branch and the right bundle branch. At the bottom of the heart these two bundle branches become thiner and form numerous, small purkinje fibres which spread out the impulse from the bottom to the top and stimulate small groups of cardiac muscle cells. That makes sure that contract from the bottom to the top and not in the middle. This effect is very important because if the heart contracted in the middle, the heart would be much less effective, because not all the blood would be squeezed out of it, but a rest amount would stay in the heart. ...read more.

They send this information to the hypothalamus, a small part of the brain, which is concerned with vital life functions and where the body's nervous and hormonal systems interact. The hypothalamus then sends signals to either the cardiac or the vagus nerve to speed up or to slow down the heart rate. When the heart must contract more frequently the cardiac nerve, also called accelerator nerve, is stimulated. The synapses at the end of this nerve secrete noradrenaline, a neurotransmitter, which increases the excitatory postsynaptic potentials, what causes the heart rate to increase. This is the case especially during exercise, when the level of CO2 in the blood increases, so that the rate of CO2 to O2 changes. This control is called negative feedback. When the heart muscle must contract less frequently, the vagus nerve or decelerator nerve is stimulated and the synapses at the end of this nerve secrete acetylcholine, also a neurotransmitter, which sets up the inhibitory postsynaptic potentials with the result that the heart rate decreases. This is for example the case after doing exercise, when the level of CO2 in blood sinks again or when the body is in rest. ...read more.