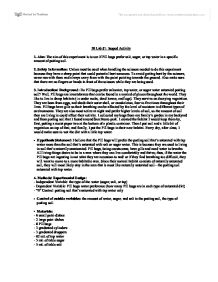 IB Lab #1: Isopod Activity 1. Aim: The aim of this experiment is to see if Pill bugs prefer salt, sugar, or tap water in a specific amount of potting soil. 2. Safety Information: Cation must be used when handling the scissors needed to do this experiment because they have a sharp point that could potential hurt someone. To avoid getting hurt by the scissors, never run with them and always carry them with the point pointing towards the ground. Also make sure that there are no fingers or hands in front of the scissors while they are being used. 3. Introduction/ Background: Do Pill bugs prefer saltwater, tap water, or sugar water saturated potting soil? Well, Pill bugs are invertebrates that can be found in a myriad of places throughout the world. They like to live in damp habitats (i.e under rocks, dead leaves, and logs). They survive on decaying vegetation. They are born from eggs, and sheds their outer shell, or exoskeleton, four to five times throughout their lives. Pill bugs have gills so their breathing can be affected by the level of moisture in different types of environments. ...read more.

� Evaluations and Improvements: One weakness that occurred during the lab was that the bugs kept crawling out of the petri-dish set-up, so some time was wasted putting them back in. This could make our results a little less accurate. Another thing that could have helped further prove the results is if another test could have been done with only dirt saturated with sugar water to see if they really did like the sugar water and to prove that the bugs weren't just moving randomly. Lastly, another weakness that occurred was that the Pill bugs all came from different habitats and that could have affected the time of water they liked. An improvement that could be made to the lab would be to figure out a way to keep the Pill bugs from crawling out of the petri-dish set-up. Also, it would be helpful to keep all of the bugs in the same habitat for a while so that they would, in a way, come from the same environment. The experiment could also be improved by being more accurate when measuring the openings in the petri-dishes and the amounts of the sugar, salt, soil, and water that are being used. ...read more.