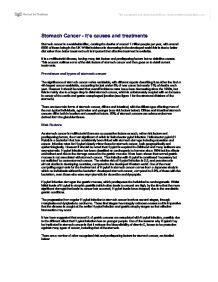 Stomach Cancer - it's causes and treatments Stomach cancer is a worldwide killer, causing the deaths of around 1 million people per year, with around 9000 of those being in the UK. Whilst incidence is decreasing in the developed world this is due to better diet rather than better treatment so it is important that effective treatment is available. It is a multifactorial disease, having many risk factors and predisposing factors but no definitive causes. This account outlines some of the risk factors of stomach cancer and then goes on to detail current treatments. Prevalence and types of stomach cancer The significance of stomach cancer varies worldwide, with different reports describing it as either the 2nd or 4th largest cancer worldwide, accounting for just under 9% of new cases but nearly 11% of deaths each year. However it should be noted that overall incidence rates have been decreasing since the 1930s, but this is mainly due to a larger drop in distal stomach cancer, which is unfortunately coupled with an increase in cancer of the cardia and gastro-oesophageal junction (see figure 1 for the structural divisions of the stomach). ...read more.

Thus infection with H pylori is considered 'necessary but not sufficient' to cause stomach cancer. The relative risk of H pylori infection is 2.5, and prevalence is almost double in developing countries, compared to the developed Western world. One of the most compelling arguments for the involvement of H pylori in stomach cancer comes from a Japanese study in which no individuals without the bacterium developed stomach cancer, compared to 2.9% of those with the bacterium, even those who were asymptomatic for ulceration and dyspepsia. H pylori infection damages the gastric mucosa, which predisposes the individual to carcinogenesis. Whilst initial levels of H pylori in atrophic gastritis (which often leads to cancer) are high, by the time that the more significant damage that leads to cancer has occurred, H pylori levels have dropped, due to the unsuitable gastric conditions. The progression from regular H pylori infection to stomach cancer involves several stages, through metaplasia and dysplasia to carcinoma. These final stages have largely unknown causes so it is imperative that the disease is caught at the earlier H pylori infection and gastric atrophy stages so that effective intervention may occur. ...read more.

If the cancer is detected early, however, survival can be better than 90%. In advanced stages of the disease surgical resection cannot remove all of the metastases, perhaps contributing to the poor prognosis. Chemotherapy 5-fluorouracil based chemotherapy is recommended in advanced stage stomach cancer that cannot be treated with surgery. However, even though it represents the most effective chemotherapy currently available, median survival rates are only in the region of 6-10 months. Other suitable drugs for the advanced stage cancer include doxorubicin and cisplatin, which have a response rate of between 19 and 86% as single agents. However more success on the chemotherapeutic front comes from combination therapy, with the most commonly used combination therapy being 5-fluorouracil and cisplatin, with an over 50% success rate being reported in a 2005 study. It has also been suggested that COX-2 inhibitors might be chemoprotective in stomach cancer, acting to inhibit the apoptosis and possibly consequent carcinogenesis aggravated by the COX-2 enzyme. Conclusion Whilst H pylori has a significant impact on the development of stomach cancer it is not necessarily causative. Instead it is deemed as producing an environment conducive to carcinogeneis. Basically anything that can damage the gastric mucosa will greatly increase the chance of stomach cancer developing. ...read more.