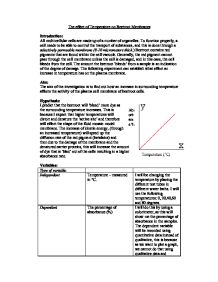 The aim of the investigation is to find out how an increase in surrounding temperature affects the activity of the plasma cell membrane of beetroot cells.

The effect of Temperature on Beetroot Membranes Introduction: All multi cellular cells are made up of a number of organelles. To function properly, a cell needs to be able to control the transport of substances, and this is done through a selectively permeable membrane (8-10 micrometers thick.) Beetroot contains red pigments that are found within the cell vacuole. Generally, the red pigment cannot pass through the cell membrane unless the cell is damaged, and in this case, the cell bleeds from the cell. The amount the beetroot 'bleeds' from a sample is an indication of the degree of damage. The following experiment can establish what effect an increase in temperature has on the plasma membrane. Aim: The aim of the investigation is to find out how an increase in surrounding temperature affects the activity of the plasma cell membrane of beetroot cells. Hypothesis: I predict that the beetroot will 'bleed' more dye as the surrounding temperature increases. This is because I expect that higher temperatures will distort and denature the 'active site' and therefore will effect the shape of the fluid mosaic model membrane. The increase of kinetic energy, (through an increased temperature) will speed up the diffusion rate of the red pigment (betalains) and then due to the damage of the membrane and the denatured carrier proteins, this will increase the amount of dye that is 'bled' out of the cells resulting in a higher absorbance rate. ...read more.

The graph clearly shows how an increase in temperature can affect the membrane activity (which is shown through the absorbance percentage using a colorimeter.) The steep incline shown on my graph (between 60-80 degrees) represents the point in which the protein in the membrane cells are becoming denatured (due to the increased temp) and allowing more of the red pigment to leave the cell. The cell membrane has a phospholipid layer, which is made up of fatty acids and when it is placed in a high temperature, the layer becomes more fluid and therefore becomes more delicate. When the carrier proteins in the cell membrane become denatured (the optimum temperature for enzymes is between 10-35 degrees approx.) they form holes and destroy the delicate layer in the membrane. This results in the beetroot pigment 'bleeding' through and any pigment in the membrane will now exit the cell. This is represented between 40 degrees and 80 degrees in relation to the absorbance level increasing. With reference to my hypothesis, the increase in temperature will increase in the amount of kinetic energy as the water will be hotter and expand resulting in more vibrations will pass through the water (kinetic energy), which will result in an increase in the diffusion rate of the pigment. Once the temperature reaches above approx. 40 degrees, the cell membrane plasma will denature due to the surrounding temperature being too high and consequently the beetroot pigment in the cell membrane will eventually leak out. ...read more.

The fact that the class put all the data together meant that there was room for variety in the results as different people using different equipment each did their own experiment. This is a clear indication that the results were not as accurate as they could have been. The smaller the percentage means that there is less variety within the data. Due to the standard deviation and error bars results it shows that the experiment may have encountered a few problems. To decrease the % of error bars or standard deviation, I could do more repeats of the experiment. However, by taking an average, which I did with each sample I think that this can show a level of accuracy with my results as because I had 5 samples, I was able to add all the results together to find a mean of the data and then plot this on a graph. In addition to this, by using a control sample of water to test the colorimeter, it meant that I could prove my colorimeter was working properly as when tested, it gave the correct absorbance percentage. Other procedures I used to ensure that variation and errors were kept to a minimum were all the beetroot cylinders were cut with the cork borer and I used a stopwatch to ensure that all test tubes were kept in for the same amount of time. If I had to do the experiment again, another variable I could measure, instead of temperature is how the PH affected the cell membrane activity. ...read more.