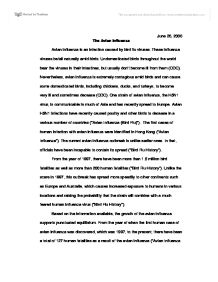 June 26, 2006 The Avian Influenza Avian influenza is an infection caused by bird flu viruses. These influenza viruses befall naturally amid birds. Undomesticated birds throughout the world bear the viruses in their intestines, but usually don't become ill from them (CDC). Nevertheless, avian influenza is extremely contagious amid birds and can cause some domesticated birds, including chickens, ducks, and turkeys, to become very ill and sometimes decease (CDC). One strain of avian influenza, the H5N1 virus, is communicable in much of Asia and has recently spread to Europe. Avian H5N1 infections have recently caused poultry and other birds to decease in a various number of countries ("Avian Influenza (Bird Flu)"). The first cases of human infection with avian influenza were identified in Hong Kong ("Avian Influenza"). ...read more.

The number of human fatalities has increased from 6 deaths in 1997, to 51 in 2006 (CDC). Nine years, from 1997 to 2006, is not much time compared to how aged the earth is, therefore supporting punctuated equilibrium since the numbers of human fatalities has increased in such a short amount of time. According to statistics recorded in Navapur, India, a major poultry farming region, 30,000 chickens have died in the past two weeks as a result of avian influenza, as opposed to no fatalities during the weeks before (Press, Associated). For the virus to evolve even more rapidly, all it needs is genetic variation, selection, mutations, and time. There have been more than millions of bird fatalities due to avian influenza worldwide, which also supports punctuated equilibrium. ...read more.

Wild birds are more likely to produce the required antibodies to fight off the infection, therefore making the domesticated birds weaker according to natural selection. This becomes an example of natural selection because of the wild bird's ability to produce required antibodies, making them stronger than the domesticated chickens. The avian influenza is a very shocking virus and the world is still yet to discover many key facts to make the virus easy to conquer. Avian influenza supports punctuated equilibrium, due to the increasing number of bird and human fatalities. Avian influenza can also become an example for natural selection due to the number of fatalities with domesticated birds and the amount of fatalities among wild birds. The avian influenza evolves rapidly and could easily evolve into a form that could be passed from human to human. ...read more.