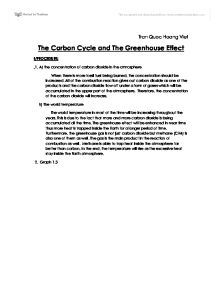 The Carbon Cycle and Greenhouse Effect

Tran Quoc Hoang Viet The Carbon Cycle and The Greenhouse Effect I/PROCEDURE: 1. A) the concentration of carbon dioxide in the atmosphere When there is more fossil fuel being burned, the concentration should be increased. All of the combustion reaction gives out carbon dioxide as one of the products and the carbon dioxide flow off under a form of gases which will be accumulated in the upper part of the atmosphere. Therefore, the concentration of the carbon dioxide will increase. B) The world temperature The world temperature in most of the time will be increasing throughout the years. This is due to the fact that more and more carbon dioxide is being accumulated all the time. The greenhouse effect will be enhanced in near time thus more heat is trapped inside the Earth for a longer period of time. Furthermore, the greenhouse gas is not just carbon dioxide but methane (CH4) is also one of them as well. The gas is the main product in the reaction of combustion as well. Methane is able to trap heat inside the atmosphere far better than carbon. ...read more.

However, the temperature start picking up again in 1970.This time, the gradient is the sharpest of the entire gradient that is expressed in the graph. The graph reached its second climax and starts to lower its gradient. In the last 30 years, the temperature is increasing still but in a slower rate. 2. For both of the graphs, my predictions went true although there is changes in the actual graph that take place. Firstly, there are decreases in a graph which I did not mention such. In the temperature graph, the fact that causes the decrease was the position of the Earth toward the Sun. There are certain times when the Sun did not give its full light energy to reach the Earth thus less light energy is converted into heat energy. Less heat energy means a colder Earth! That is why the decreases do exist in such graph. Another thing was about the rate of increases or the gradient of the graph. All of the three graphs have different rate or gradient makes one graph look totally distinctive toward another, for example, the graph of 1.4 and 1.2.These two graphs differ from each other in the few first years of the graph (1880-1910).This is probably due to the content of the graph. ...read more.

2. A) The amount of carbon dioxide produced by combustion should be somewhere near 6.0.10^9 t B) The atmospheric carbon dioxide concentration should be 360 ppm by 2000 C) The temperature increase compared with 1880 should be 0.6 degree Celsius. The assumptions here could be that the Earth position should be such that the Earth atmosphere will be able to receive the most of the Sun light. Another assumption is that there is no sudden change the carbon dioxide emission from the ground. The first assumption is there because of the fact that the Earth position matters. Certain position gives the Earth a cooler temperature and different position does the opposite things. The second assumption is mainly made due to the fact that the human world is ever-changing and there are no one can predict what might happen next. Thus, the carbon dioxide emission rate is not fixed according to the timeline. These reasons made the assumptions valid. 3. There are various sources that produce carbon dioxide beside combustion from fossil fuels. These are volcanoes , gas passes off from animals, natural reaction under the sea, carbonated drinks releasing carbonate dioxide.That is probably the most sources that produce carbon dioxide. ...read more.