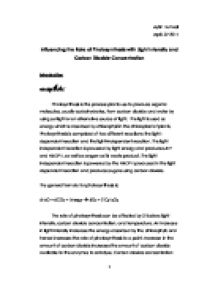 For more accurate average, more trials should be done. This would decrease the amount of deviation of the number of bubbles produced and would produce a better average value. Unfortunately, the error which comes from using the same elodea cannot be reduced. For using a different plant for each experiment would also affect the data for the plant would vary in surface area and freshness. However, the data still did allow one to see the effect of each condition correctly. Instead of counting the number of oxygen bubbles produced, the test tube would the elodea could be covered so that no gas escapes. The test tube could then be connected to a beaker which is on scale or another instrument to measure mass. Then as the plant produces oxygen, the mass produced could be measured rather than having to count the bubbles which can be affected by human error. Since the objective of the lab is to observe how factors influence the rate of photosynthesis. The experiment could be extended so that it also observes how temperature affects the rate of photosynthesis by submerging the plant in different temperature water. Also, instead of just using white light, different colored lights or transparent glossy paper to see the affect of different colored light on plants. Also, a wider number of distances would improve the experiment for it would provide better accuracy of how light intensity affects the rate of reaction. ?? ?? ?? ?? 1 ...read more.