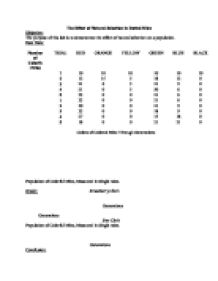 The orange, yellow, and black mice populations have been completely eliminated. The final product leaves the green and blue mice with the same population, and the red mice population with three less than the green and blue. This time, the two dominant colors are blue and green, with red coming next. Their advantages in color gave them the best rate of survival in the star environment. The eliminated colors were unable to re-enter the environment after their eradication, this solidifies the theory that with natural selection, all species lacking the necessary traits to survive will not be permitted to reproduce and pass on weak traits. The dominating colors of the simulation in the end of the trials showed that over time and by natural selection, they were the colors that had the best rate of survival for the selected environment. Evaluation: An error that occurred during our lab was that during one of the trials, we ended up with a miscount and instead found that we had an extra mouse after the Gooney birds preyed on them. ...read more.

A limitation of the simulation is the fact that it is only a representation of a realistic living environment and cannot imitate the conditions of one. The simulation was limited in the environment, for it never changed throughout the entire experiment. Instead, an environment would at the least have subtle changes in the time period of five generations. Also, the ratio of Gooney birds to mice would not be consistent for five consecutive generations. The cumulative population of the mice at the end of the trial would always be 60 and there would always be four Gooney birds hunting. Population size would, in reality, vary between generations due to disease, natality rates, mortality rates, shortage or abundance of resources, overpopulation due to immigration, or emigration. The data is inconsistent due to this limitation, for the fact that the simulation does not take into account these factors, natural selection is unable to ensue. To improve this, the Gooney birds could get an allotted time to capture prey instead of having as much time as it would take to capture 10 mice. ...read more.